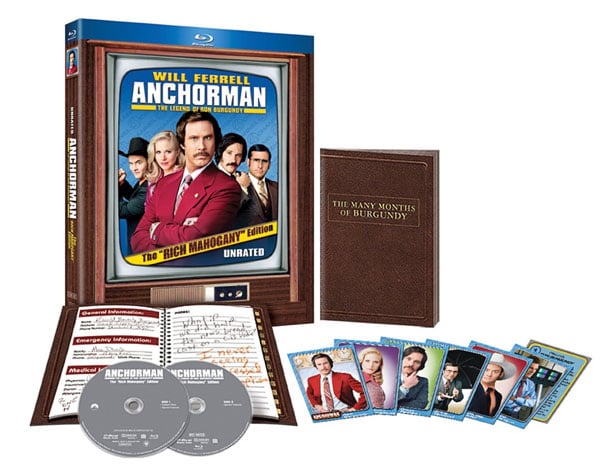 Anchorman: The Legend of Ron Burgundy is perhaps one of the funniest movies in the last 20 years! I guess that’s up for debate but depends if you can tolerate Will Ferrell or not. Before the much-needed sequel comes out, Paramount has re-released the movie along with some new extras and other version of the movie.

I’m not going to explain the plot to this movie because you probably know what it is by now. Anchorman has been on cable lately, and I have to watch it a lot of the times it’s on. It’s just one of those movies where once it’s on, I have to watch it and I’m usually laughing like it’s the first time. I still think it holds up after so many years that it has been out. There’s just so many classic lines from the movie, that get constantly quoted or misquoted still. This edition of the movie has both the theatrical and extended edition, which I prefer. The extended just has a little more to the story and a lot more jokes.

This Rich Mahogany Edition also has the Wake Up Ron Burgundy “lost movie,” which essentially is a bunch of poorly edited clips and made into a shittier version of the movie. I’m a big fan of Anchorman but can’t get past the first 10 minutes of this so-called “lost movie.” It’s just not really that funny, the audio kind of sucks, and some of the clips don’t make that much sense in the context of the story. Some of the footage is used in the real movie or in the bloopers so some of it will look familiar. I like they tried to make another movie out of all the cut clips but they were cut for a reason.

Besides that, there’s a load of extras! I’m not sure what was used or not on previous DVDs and Blu-Rays, but there’s raw footage of all the “good takes,” audio commentary, bloopers, a ton of deleted and extended scenes, cast auditions, and a few other things. I always loved the bloopers and extended scenes from this movie. The raw footage stuff is great too because you just see how many times they say the same lines, but in a different way. If you got a few hours to kill, this is something to watch.

I was happy to get this on Blu-Ray for review since I only had Anchorman on DVD. After watching this movie for the millionth time, it’s still holds up as one of the funniest movies ever. Some may disagree with me but whatever, go write your own review then. I’m hoping that the sequel won’t suck and be like Wake Up Ron Burgundy. I’m skeptical that the movie will let up to the hype and won’t tarnish this movie. Time will tell.