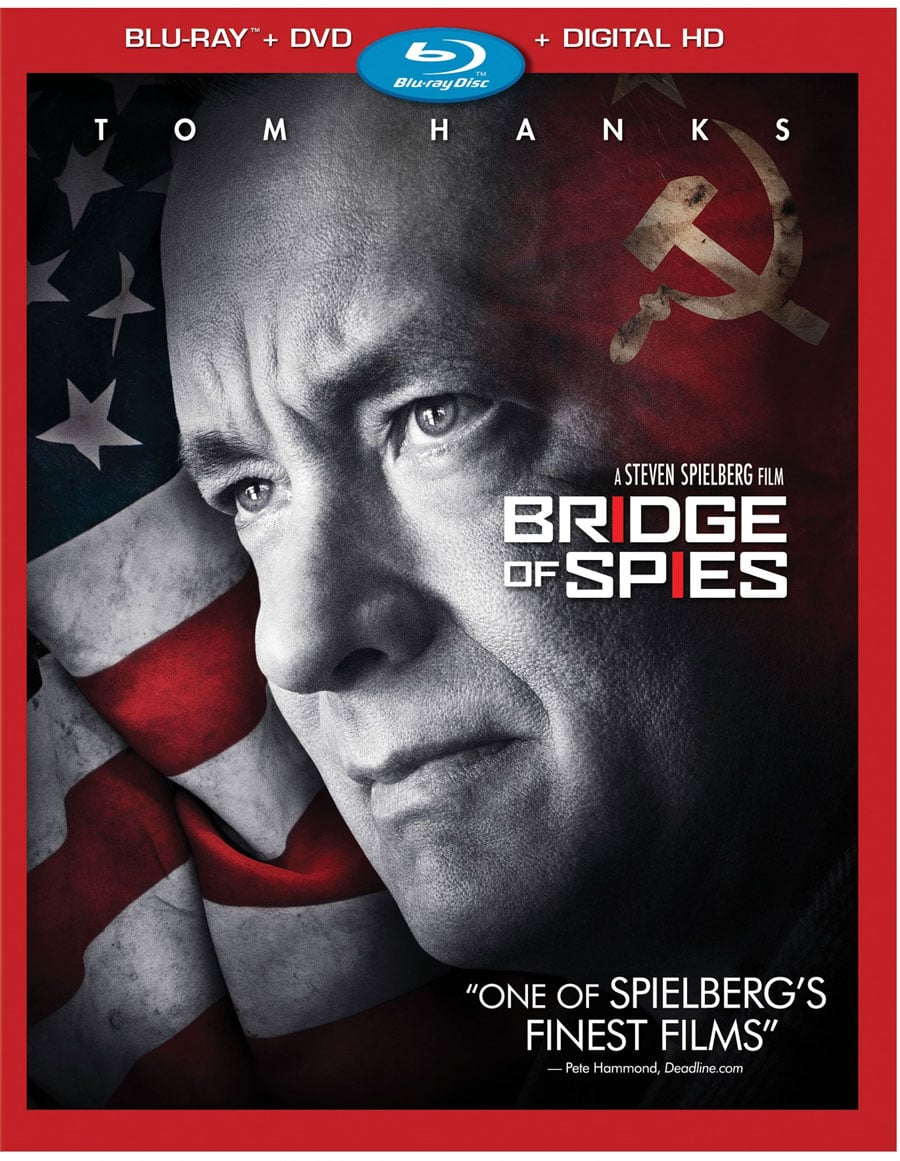 The latest Steven Spielberg movie is nominated for 6 Academy Awards and is now available on Blu-Ray, DVD and Digital HD. The Cold War story could have been a complete bore but the winning combination of Spielberg and Hanks makes this a must-see.

Based on true events, Bridge of Spies is about Brooklyn insurance lawyer James Donovan (Tom Hanks) caught in the middle of the Cold War. Donovan is appointed to defend Soviet spy Rudolf Abel (Mark Rylance), even though it’s a case that can’t be won. It’s not a popular choice to defend a Soviet spy either as Donovan and his family are repeatedly threatened. Abel is sent to jail and not sentenced to death, thanks to Donovan. In the meantime, a US spy plane is shot down over the Soviet Union and the pilot is captured. Donovan is picked to negotiate and do a prisoner exchange: the pilot for Abel. Of course, not everything is that easy.

The first half of Bridge of Spies started out a bit slow. Once James Donovan went over to Europe, that’s when things got interesting and really good. Maybe I need to re-watch the first part of the movie but I thought it could have been structured a little differently. The opening scenes with Abel were good but the stuff after that bogged it down at times. But with that nitpick said, the story was still very interesting since I didn’t know anything about this. You won’t be getting some action-packed thriller like Bourne or Bond. The movie is a historical drama with great acting, beautiful cinematography and of course, direction. The film was actually shot at the real “Bridge of Spies.” I don’t think it would have been as special if they did this in the studio. Good thing George Lucas wasn’t directing this film.

Spielberg and Hanks have been working together for years (Saving Private Ryan, Catch Me If You Can, The Terminal) and they continue to provide some compelling stuff. Even if it’s something they are just producing (Band of Brothers, The Pacific); the duo have been great together. The rest of the acting was good. Mark Rylance wasn’t in the movie all that long but he gets a Best Supporting Actor nod over Tom Hanks. Kind of weird if you ask me. Scott Shepherd hasn’t been in a whole lot of movies but thought he was one of the actors that stood out as well. Some actors weren’t as known as others. Now that they have worked with Spielberg, i’m sure they will be appearing in a lot more movies now.

Usually Spielberg works with composer John Williams but since he was scoring Star Wars, Thomas Newman stepped in. Newman is probably one of my favorite composers behind Williams so he did an awesome job. Plus he’s no stranger to Tom Hanks movies either (Road to Perdition, Saving Mr. Banks). I didn’t think much of the score when I heard it originally but after seeing the movie, I like it a lot more now.

The Blu-Ray contains a few featurettes like A Case Of The Cold War, U-2 Spy Plane, Berlin 1961: Re-creating The Divide and Spy Swap: Looking Back On The Final Act. A Case Of The Cold War featurette was the best one because it went into a lot of the filming, Spielberg’s connection to the story, and had a lot of interviews with the crew. The other 3 featurettes were good but weren’t as long as the other one. Besides the featurettes, that’s about it. You get a digital HD code with the movie but it’s not Ultra Violet. You can pick from iTunes, Google Play and others so I picked Google Play. It’s just annoying that all these studios can’t agree on a streaming service that’s got everything in one spot.

Bridge of Spies is worth watching if you like historical dramas, Spielberg and Hanks. I don’t think it was the best movie of the year but it was still a very good film. Now excuse me, I have to go rewatch Saving Private Ryan and Catch Me If You Can.

A Case Of The Cold War
U-2 Spy Plane
Berlin 1961: Re-creating The Divide
Spy Swap: Looking Back On The Final Act