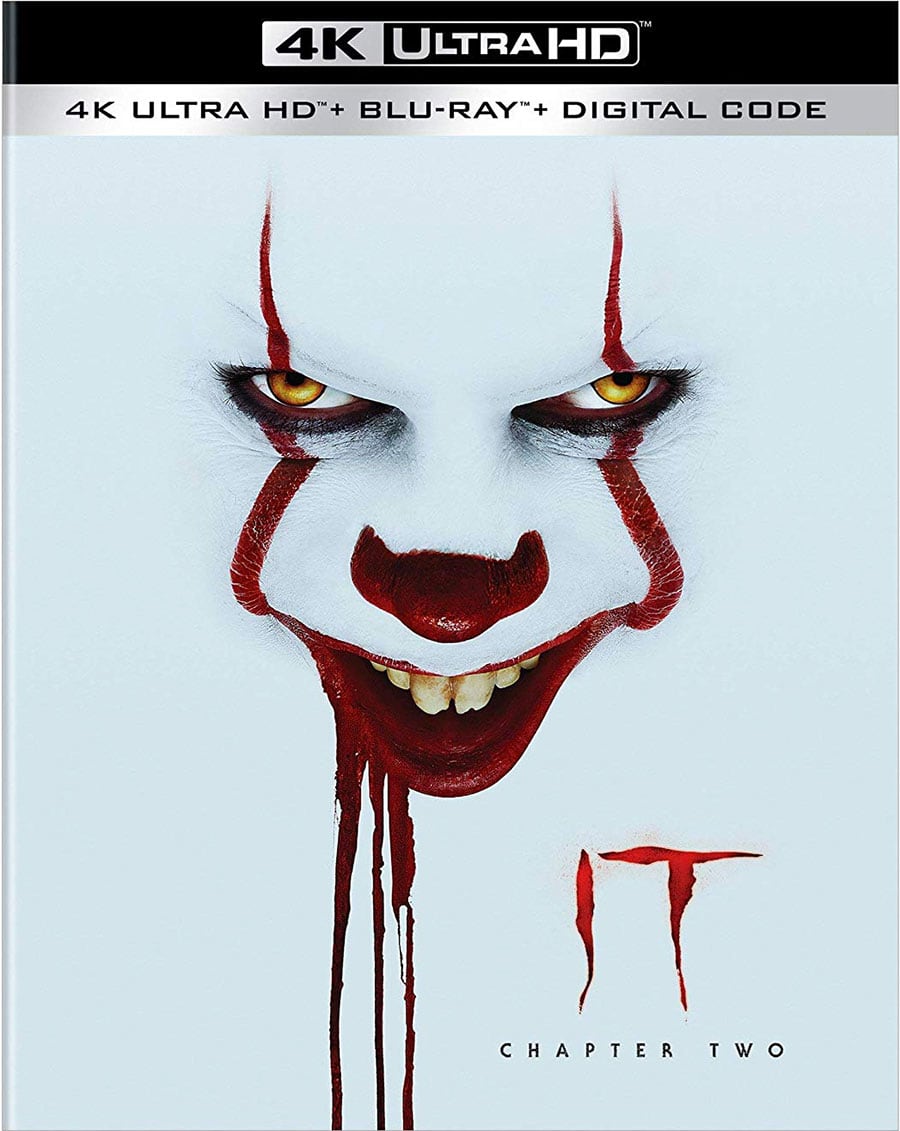 IT: Chapter 2 is now out on 4k, Blu-Ray, DVD and digital and I finally got a chance to see the movie. The movie is pretty good and I enjoyed it, of course there are some flaws. In the end, IT: Chapter 2 is just too damn long for this type of movie but still a satisfying conclusion to the story.

27 years later, The Loser Club are called back to Derry by Mike (Isaiah Mustafa), who’s now a librarian and hasn’t left Derry. Pennywise (Bill Skarsgård) has returned and is killing people in the town again. The rest of the Loser Club: Beverly (Jessica Chastain), Bill (James McAvoy), Richie (Bill Hader), Ben (Jay Ryan) and Eddie (James Ransone) return hesitantly with vague memories of the past. Stanley (Andy Bean) decides to stay behind. The group meets up for dinner and then things start getting weird from there. Once each member faces their own demons individually, the Loser Club goes up against the demonic clown one final time.

I loved It: Chapter 1 and I never read the book or seen the old miniseries. The first movie had a Stranger Things / Goonies feel to it but wasn’t sure how this one would turn out. I thought it was a good continuation of the story, with perfect casting for the adult versions of the Loser Club. That Goonies feel is gone with Chapter 2 but I still enjoyed the movie for the most part. I would say the biggest thing I didn’t like was that the movie was too long and could have easily cut out a half hour of material. At least, save the long movie for the Blu-Ray/DVD and have the option to watch it as extended or theatrical. Since I watched this on 4k Ultra HD, I suppose I would have watched the longer version anyway. My point being IT: Chapter 2 is long for a horror/thriller type of movie.

Parts where they could have cut down a lot was the individual storylines of the Loser Club. There’s a lot of fat in those scenes where it could have been streamlined a bit better. I think the frights are still there, at least for me there’s certainly some creepy shit in here. Others looking for a scarier movie than the first will probably not find that here. Probably the scariest moment of the movie was the intro with the homophobic teens throwing the guy over the bridge. I guess that was based on a true story but scary in terms that shit like that still happens today. Pennywise wasn’t really as terrifying as he was in Chapter 1 or maybe that was just me. I feel like he was far worse in the first movie. People with clown phobias will still not want to see this most likely. It was a different type of Pennywise in this movie, who in a way felt like he was scared of the Losers since they were a threat to him.

I thought the ending was fine, but perhaps relied on CGI too much. Maybe if they simplified it a little bit, it would have better. With that said, the ending didn’t bother me too much and that complaint is more of a nitpick. Like I said a few times, the biggest issue for me was the runtime and how the story seemed to get bogged down at times when people were on their separate journeys. I thought the best thing going for this movie was the acting and how much all the actors looked like the young actors of the first IT. It makes it easier to believe you’re watching the grown-up characters. Bill Hader has been on a great streak lately and continues to stand out on things he’s starring in. Jessica Chastain wasn’t my first choice for Beverly (Hi Amy Adams) but she did a good job with the role. James McAvoy was a great choice for Bill and same goes with James Ransone as Eddie.

The 4k and Blu-Ray discs contain some good extras like audio commentary, the excellent documentary-like featurettes The Summers of IT, Pennywise Lives Again and Finding the Deadlights. Each Summers of IT is about half an hour long and takes us back to a few years ago filming the first movie and then showing us all the behind the scenes footage of this movie. You learn a lot about the actors and how much both old and new cast bonded, and how the new cast bonded with the old cast as well. A lot of them have a lot of funny and great things to say about director Andy Muschietti. After Jessica Chastain had to be in a bloody water tank all day, she gave Andy and his wife Barbara (producer for the movies) a big hug and got them bloody too. It’s interesting and nice to see how caring Bill Skarsgård was to the younger actors too. There’s several clips of him asking how they were doing after acting with them in the clown costume. It was just great to see how things were done, and I love watching these type of featurettes for movies.

It: Chapter 2 loses some of that childhood innocence and Goonies-like vibe it had for the first movie. In the end, this is still a satisfying ending for the two movies and I was happy with how everything turned out. It’s just too long. I’m not usually a thriller/horror person but this was something I could tolerate. I liked how the films were shot, the acting was excellent, as well as the music as well. Who knows, maybe I’ll tackle the novel next but something tells me I’ll probably not get there. Definitely give this a shot, but if the movie length is an issue; try to break it up and watch it in pieces then.