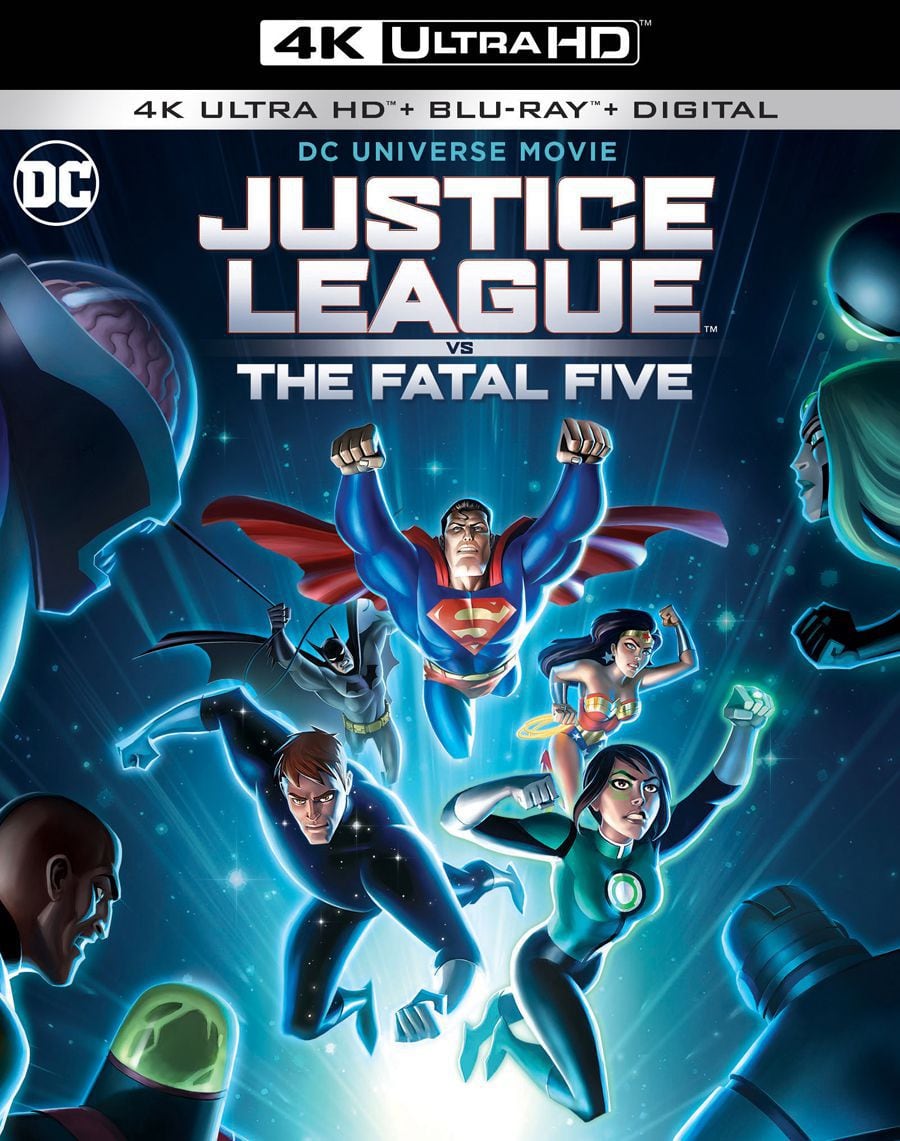 From the future comes a threat that is so deadly that the Justice League will need help from the unlikeliest of sources to prevent a catastrophe of galaxy-wide proportions.

“Justice League vs. The Fatal Five” is a Bruce Timm inspired DC animated film that pits a modified version of the Justice League against the Legion of Super-Heroes villainous 30th century foes the Fatal Five. We are also introduced to the time-displaced Star Boy and the Jessica Cruz Green Lantern.

The story is fairly straightforward with the Justice League discovering a mysterious orb and upon investigation finds that it was a transport ship for three members of the Fatal Five; Tharok, The Persuader and Mano. Having planned on arriving in the past in order to rescue the Emerald Empress and Validus, the Fatal Five manage to take out Superman who barely survives thanks to the help of Mister Terrific and set out to find the key to unlocking the impenetrable prison which currently holds the Emerald Empress. The key just happens to be Jessica Cruz who, a year after witnessing her friends horribly murdered only feet away and who nearly died while escaping, somehow stumbled upon a Green Lantern power ring which saved her life. She has become an unwilling member of the Justice League who had her powers forced upon her but who hasn’t quite recovered from the trauma of her past ordeal.

With the Fatal Five seeking out Jessica, Star Boy who has amnesia after landing on Earth nearly a year ago is beginning to rediscover who he is and escapes Arkham Asylum after being put there by Batman who believes he is just another lunatic with delusions of superpowers. Star Boy knows that Jessica Cruz, who he knows from his timeline as Limelight, is in danger and tries to help her. With an evil plan to destroy Jessica’s city of residence if she doesn’t cooperate, she submits to the Fatal Five and agrees to help them. We learn that the Emerald Empress is held in one of the most powerful prisons in the universe on the prison of OA, home to the Green Lantern Corps.

Jessica leads the members of the Fatal Five to OA and manages to outwit them with a secret Green Lantern code for help and backup arrives and an epic battle ensues. Jessica fends off the Fatal Five to the best of her abilities but her friends are gravely injured in battle and she falls to the villains. The Emerald Empress and the mighty Validus are freed from their prison and drain all of the energy from the Green Lantern Corps central power battery. They head back to Earth to fulfill their heinous plan of wiping out the current era of superheroes and all that will follow by destroying the sun.

With her ring cleaved in two, bruised and beaten Jessica recites her oath with all of her might and willpower and fully recharges into the Green Lantern that she was meant to be. She travels back to Earth to the location of the Fatal Five’s time machine and joins the Justice League in the battle to prevent the destruction of humanity. Nearly defeating the Fatal Five, the Justice League is too late to prevent the Emerald Empress from sending out her destructive eye towards the sun. Jessica brings the mountain down upon the Fatal Five as Superman jets towards the sun to stop the deadly ray. Knowing that Superman cannot stop the eye, Star Boy persuades Jessica that he can stop it and that she has to trust him. Bolting after Superman, the two cosmic heroes fly past Superman who tried to get in the way of the eye as it flew into the sun. Knowing that this is the end if he doesn’t do something immediately, Star Boy phases out of the Green Lantern’s force field and disappears into the sun. With his energy feeding the sun, it manages to heal itself back to normal. With Star Boy’s sacrifice, all of the galaxy’s creatures present and future have been saved.

In the movie’s final scenes, the Justice League is seen holding a funeral service for Star Boy. The Legion of Superheroes arrives to pay their respects to their fallen compatriot.

“Justice League vs. The Fatal Five” felt a lot different from both the Bruce Timm Universe movies as well as the shared animated universe films as the story touched upon deep traumas for main protagonists as well as a strong sense of self-worth and sacrifice. Both Star Boy, who had to take constant medication due to his abilities and Jessica Cruz who witnessed a horrible tragedy firsthand, had issues not seen in superheroes in quite some time. Tragic origins are a dime a dozen but when done right you get a sense of closeness and empathy and that’s how those two characters are portrayed.

The movie does focus a lot on Jessica Cruz and could have been called “Jessica Cruz vs. The Fatal Five” as at times the Justice League was no more than an afterthought to occupy villains in the background. The Legion of Superheroes was only briefly touched upon and only appears after the death of Star Boy. They couldn’t have conveniently appeared an hour earlier? Alas, it is a supposed Justice League movie or something of the sort. From what I gather this movie vaguely fits into the timeline of the Bruce Timm animated universe as canon as Miss Martian was on the verge of gaining membership and other members of the team have moved on to continue their own agendas. I am totally fine with vague continuations of the Bruce Timm universe if I may say so myself.

As always, the animated movies look absolutely gorgeous in 4K, even more so with the Bruce Timm style animation. That look will never get old. The features are the usual fair of previews, sneak peeks and past cartoons that relate to the current movie. The “Battling the Invisible Menace” feature is a stark look at tragic characters and their day to day dealings with emotions and trauma while the commentary with Bruce Timm is as always, insightful and informative.

Up next on the slate in regards to animated DC movies is “Batman: Hush” and quite possibly more of the Bruce Timm universe. The next year is going to be a good one indeed for DC animated films.

Bottom Line: The overall story of “Justice League vs. The Fatal Five” is somewhat generic comic book fare but the introduction of Jessica Cruz into the Bruce Timm animated universe as well as the heartfelt sacrifice of Star Boy really bring the emotional weight to the movie. Also, Sam Liu hits it out of the ballpark once again with his fight scenes and directorial talents. Fans of “Batman: The Animated Series”, “Justice League” or “Batman Beyond” need to add this one to their collection as it is considered canon by the man himself.
Running Time: 77 Mins
Rating: PG-13
Extras Rating:
Overall Rating: