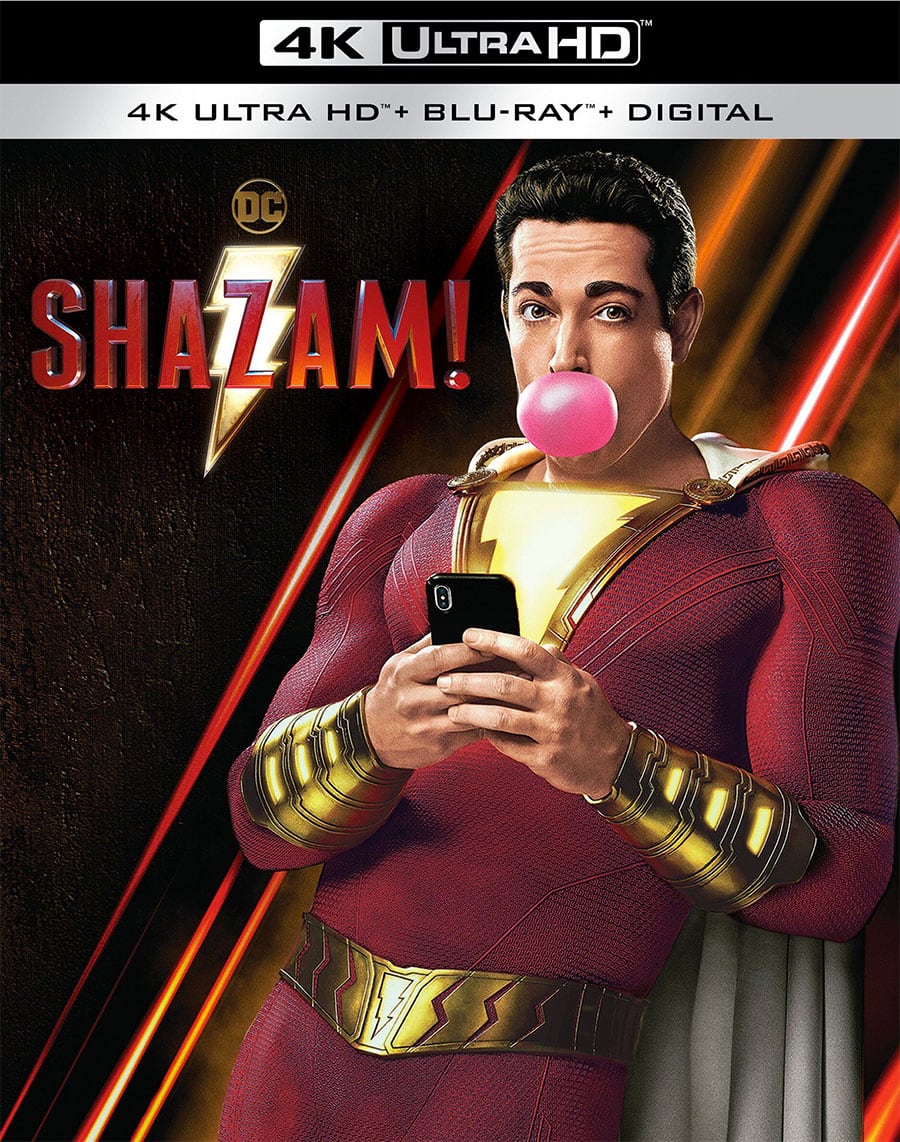 Shazam is the latest DC / Warner Bros movie and it’s such a fun, entertaining movie. I think it’s the DC Comics movie since The Dark Knight.

The movie is about teenager Billy Batson (Asher Angel), a foster child with many run-ins with the law. Billy just wants to be alone and not be with a family, but deep down he’s on the lookout for his Mother. He’s brought to a new foster home, parents who were foster kids and there’s a bunch of other kids in the house who are foster kids. One of them is a superhero junkie Freddy Freeman (Jack Dylan Grazer). While saving Freddy from some bullies, Billy transports to Rock of Eternity, where he meets the ancient wizard Shazam (Djimon Hounsou) who gives his superpowers to Billy to become the new Shazam! (Zachary Levi). Only problem, Dr. Thaddeus Sivana (Mark Strong) has been looking his whole life for the hidden temple after getting denied being a champion. Dr. Sivana steals the Eye of Sin and becomes evil and destructive with his eye set on finding the boy who became Shazam!

For not knowing anything about Shazam before seeing this in theaters, I ended up absolutely loving this movie. I loved everything from the story, Zachary Levi, Asher Angel and Jack Dylan Grazer and the rest of the kids, the humor, the effects, the score and this even has some heart to it as well. It’s probably the first DC movie that I loved from start to finish since The Dark Knight. Sure, Wonder Woman was good but not the last part of it, and Aquaman was kind of a silly movie. Fun but silly. Shazam felt like a different movie to me and worked on many levels.

Zachary Levi was the perfect choice for this role, since he embodies a teenager so well. Mark Strong does what Mark Strong does. He just plays villains so well. All the kids were great, especially Asher and Jack. Better make another movie fast so they don’t grow up so fast. Not only was the movie very funny, there were some touching moments as well. Stuff involving Billy and his mom was tough to see. For a movie that’s sort of light for the most part, there were some surprisingly darker stuff in there too with the Sins. My favorite scenes were with Shazam and Freddy when Billy finds out he’s Shazam for the first time and at the grocery store, testing out various things, Shazam running away from Sivana in the toy store and at the end battle when Billy’s brothers and sisters get involved.

The extras were pretty good and there’s well over an hour of material. You got half hour featurette about the magic used in Shazam, but shows you filming the movie all things like that. They filmed most of the movie in Canada, but used one shot in Philly after it didn’t work originally in Toronto. That’s when Billy/Shazam was on the Rocky steps in Philly. You saw a lot of wire work with Zachary and how much of a kid he really is on and off the set. The deleted / alternate scenes were good and there’s director intros on why they were cut. There were some great deleted scenes and then there was some okay ones. One scene I was glad wasn’t included was Freddy flying near a plane at the end, and a kid seems him and it just felt so Disney-ish lame to me. There was one scene between Billy and Mary that should have been included where she catches him sneaking out of the house. There’s a fun motion comic showing the superheroes cutting school to help out with robbery. Gag reel was fun of course too. The movie itself looked great in 4k but wish the extras were included on that disc instead of them on the Blu-Ray disc.

Shazam could have been really cheesy, but thankfully it’s not. Even seeing some of the deleted scenes, some of things cut felt like lame or cheesy to me so I’m glad with the cut we got. Zachary Levi really portrays Shazam and a teenager quite well…a little too well. The movie was mostly light, with a few dark things in it like monsters eating heads. My 3.5 year old son watched most of it (I took him out of the room for the boardroom scene) and seemed to like it a lot. Every kid will be different of course, especially when there’s a lot of cursing in this. Thankfully that went over his head for the most part and didn’t think much of the monsters. Can’t wait to see what they do next with this franchise and hopefully it’s just as good as this one.