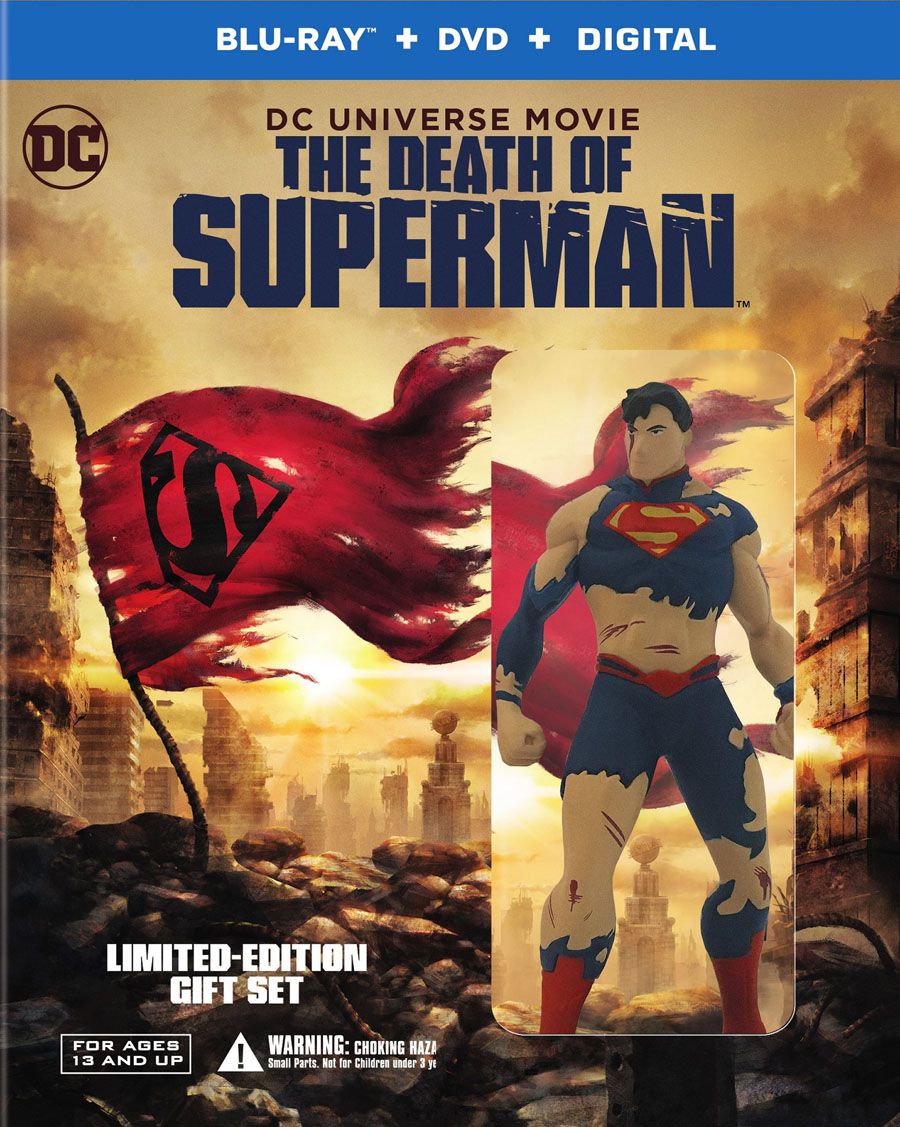 Doomsday is coming. For the people of Metropolis it looks like the end of the world is upon them. Only one man can stand up to the unstoppable beast. One “super” man. But will his greatest moment be his last?

Back in 2007 “Superman/Doomsday” hit the DVD market and was the first full length direct-to-DVD movie for the DC Universe Animated Original Movies. Obviously it was loosely based off of “The Death of Superman” story arc from the 90s and was well received which launched the successful run of DC animated original movies.

How does the 2018 version of “The Death of Superman” differ from the Bruce Timm directed version? First of all this film adheres to the current ongoing shared universe within most of the DC animated movies. The Justice League’s members are consistent with recent movies as are certain aspects of the characters such as Superman and Wonder Woman’s recent break up, which sets the stage for a somewhat rushed push towards Superman + Lois Lane. If you’ve been following along with the recent movies you will know what’s up with supporting cast members such as Lex Luthor after the defeat of the Legion of Doom among others.

Secondly, “The Death of Superman” is the first part of a two-part movie series with the second movie being “Reign of the Supermen”. Instead of trying to condense everything from the comics including the Death of, Funeral for a Friend and the Reign of the Supermen/Return of Superman…this movie gets to focus completely on the coming of Doomsday and Superman’s death at his hands. While the later part of this movie glosses over almost all elements of “Funeral for a Friend” (including the Superman armbands that even Darkseid wears), it definitely sets up the plot for “Reign of the Supermen” with scenes taken directly from the source material.

Having recently re-read the entire “Death of Superman/Return of Superman” run, the story was still fresh in my head and it was easy to see so many of the changes made for this story as compared to the original run. One of the major changes involved comic continuity of the 90s and the Justice League lineup. Back then we had to deal with the D-list Justice League International, comprised of Booster Gold, Blue Beetle, Maxima, Fire, Ice, Guy Gardener and Bloodwynd who was actually Martian Manhunter in disguise, trying to put a stop to Doomsday as he plowed through them like they were gingerbread cookies. In this movie we get a glimpse of what would have happened if the big leaguers went up against Doomsday. Well…he pretty much went through them all like they were gingerbread cookies.

Much like in the comic, Doomsday was a major threat hell-bent on killing. There were some brutal scenes of him crushing scientists heads, disarming some Atlanteans…literally and stomping and smashing cars on top of civilians and police officers…thus earning the movie its PG-13 rating.

There were a few obvious changes made to the storyline to fit with the shared animated universe but that was expected and they fit in well to round out the story and set up the next movie. Staying true to the comics we get the introduction of Bibbo Bibbowski as well as John Henry Irons voiced by Black Lightning himself, Cress Williams but again, in a slightly different way than the original story.

What really shines in “The Death of Superman” is the one thing that should…Superman and his supporting cast. In the original storyline Lois Lane was just as important as Clark Kent and Superman. She and Clark were engaged at the time of his death and, even though Lois is one of the strongest women in all of comics’ history, she fell apart. She was the heart and soul of the Superman comics following his death and in this film we can tell that she is the love of Superman’s life and is who he fights for every time he charges out in the unknown. Whereas in the comics Lois had already known of Clark’s duel identity, in the movie he has yet to reveal his identity to her and it plays a large part in the third act of the movie. You also get to see how Superman interacts with fellow members of the Justice League in a casual setting as well as his friendships with Jimmy Olsen and Bibbo as well as his recent fling with Wonder Woman. Superman and his relationships are a key factor in this movie as we see how so many people love and adore him and how he would give his life for each and every one of them. This is something that the live action movies have seemed to fail at doing so much lately. Superman is much like Captain America…he is for the people, by the people and it is portrayed well in this movie.

One of the best things in regards to “The Death of Superman” is most definitely the action scenes. Whether it’s Doomsday’s first encounter with the Justice League or Wonder Woman going toe-to-toe with him to no avail as she faces certain death or any of the multitude of amazing fight scenes between the title contender or the champion, these scenes continued to impress…one after the other…leading up to that one final blow. Such a cool set up and finale.

There have been dozens of DC animated original movies since that first “Death of Superman” re-telling and, while I may not be the biggest Superman fan in the universe, “The Death of Superman” is hands down my favorite of all of the films released so far. It did well in paying homage to the original comic book arc all the while adding a fresh new coat of paint to it so that it fits in well with the shared animated universe. While it may not bring anything completely new and fresh to the table, it doesn’t need to because the original story holds up so well to this day. Having that story come to life and staying (mostly) true to the source material is what makes this movie so great. It’s not condensed and glossed over as much as “Superman/Doomsday” was and it feels like a naturally organic fit amongst the other shared universe films. With the “Reign of the Supermen” arc getting its own full length movie early next year, it will surely add to the depth and narrative of this movie while also delving deep into the lore of Steel, the Eradicator, Cyborg Superman and Superboy as they try to prove that they are the one true Superman.

Special Features:
Death of Superman: The Brawl That Topped Them All
2 Bonus Cartoons
A Sneak Peek at DC Universe’s Next Animated Movie: Reign of Supermen

Bottom Line: A great modern adaptation of one of DC Comics greatest Superman runs. Not only did the movie get the opportunity to focus more on the arrival of Doomsday and the battle to the death without the rush, but also to set up the second part of the saga in “Reign of the Supermen” and the obvious return of the Man of Steel.
Running Time: 81 Mins
Rating: PG-13
Extras Rating:
Overall Rating: