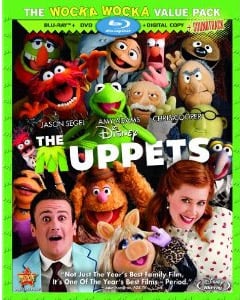 The Muppets are back, thanks to Jason Segal for writing a fun script that should please both new and old fans.

The movie starts out about a muppet named Walter (Peter Linz), who is the Muppets’ biggest fan. He lives with his brother Gary (Jason Segal) and still lives him in his later years. Gary and his girlfriend Mary (Amy Adams) plan a 10-year anniversary trip to Los Angeles, and of course Gary invites his muppet brother Walter along for some odd reason. They take a trip to see the old Muppets theater and studio and see that everything is run down. Walter overhears that Tex Richman (Chris Cooper) plans on using the old theater to drill for oil. Walter, Gary and Mary track down Kermit The Frog at his mansion and try to come up with a fundraiser to win back the old theater. They just have to get old group back together.

I’m glad to see that the Muppets are back, and happy I finally got a chance to see the movie over the weekend. I’ll admit I was getting sick of seeing the movie trailers for the movie but knew it would be good since Jason Segal made this his passion project. Jason Segal, Amy Adams and the humans are essentially the secondary characters and not that interesting honestly. It’s all about the original Muppets! The new Walter muppet was kind of a wimp too but what do you expect with the Muppets biggest fan. He’s a bit of pain because he’s always in the way of Gary and Mary getting busy.

The music in the Muppets was really good too, and I’m not usually the one to praise singing in movies. The music was supervised by Brett Mackenzie, who won an Oscar for this movie as well. Usually I groan when people would sing in a movie, but not with this one. The songs are fun, happy and might even make you chuckle or two.

Besides the music, the jokes and sight gags were funny at times. I think the only thing I had to complain about was that the movie was a bit on the sappy side sometimes. It’s a kid movie, lighten up a little with all the sad music. Well I guess the actual song soundtrack is a bit cliche or over-used as well like “Bad to the Bone.” One music gag I enjoyed was the chickens covering Cee Lo’s “Forget You” and it was nice to hear “Rainbow Connection” and “Mahna Mahna” again. Oh yeah, seeing Chris Cooper rap is a sight to see as well!

One special feature I liked a lot was when you paused the movie, it was Muppets intermission. There would be clips and characters popping on screen like Statler and Waldorf, Kermit and Miss Piggy and others. It felt like waiting to see their show at Disney/MGM Studios in Florida. Good stuff! The Blu-Ray/DVD Combo has deleted scenes, featurettes, full songs, bloopers, audio commentary, and those popular trailer spoofs. The bloopers were funny because well, it’s muppets messing up their lines and goofing off. What’s not to like about that?! I love that there’s a soundtrack download code included in this collection as well. I know what I’m putting on my iPod! The other stuff is okay but I thought the bloopers, the soundtrack download and the Scratching the Surface featurette were the best.

If you’re a fan of the Muppets, you’d be a fool not to pick this up on Blu-Ray or DVD. Obviously the Blu-Ray is better than the DVD for quality and content. I recommend seeing this if you got little ones too.

Bottom Line: The Muppets are back and I can’t wait to see the next movie!
Running Time: 103 mins
Rating: PG
Extras Rating:
Overall Rating: