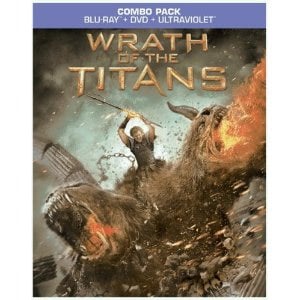 Wrath of the Titans picks up ten years later after Zeus’ demigod son Perseus (Sam Worthington) defeated the Kraken. He lives with his son Helius and just wants to be a fisherman but things hit the fan when Zeus (Liam Neeson) gets betrayed and captured by Hades (Ralph Fiennes). Hades plans on draining Zeus’ power to unleash their evil father Kronos. It’s up to Perseus again to save his Father and earth from evil rule & deconstruction.

From not knowing much about the first movie, I could pick up on things pretty quickly. Honestly, there’s not much you really need to know because this plot is so super thin. The movie is barely over 90 minutes so it’s basically an action flick. The actors do their best with the cheesy dialogue so can’t really fault them. Sam Worthington has his Russell Crowe in Gladiator accent down pat. I swear I had to put subtitles on just to hear him mumbling. Toby Kebbell provides the comic relief a little but I liked his character for the most part. Bill Nighy and Danny Huston are wasted in this movie. Which brings me to Rosamund Pike. She is about the only female in the movie, and she replaces Alexa Davalos as Andromeda. She really isn’t even necessarily in this movie.

In a nutshell, Wrath of the Titans is a quick, action-packed CGI-fight fest. The CGI for the most part looks really good. If we learned anything from the Star Wars prequels, just because it looks nice doesn’t mean it makes for a good movie. This is the type of movie to just put on during a boring weekend and turn your brain off. With that said, it’s still entertaining for people with short attention spans.

The Blu-Ray quality looked excellent and the extras were okay. There’s a storyboard comparisons, picture in picture which I’m not really a fan of, and some focus Points featurettes. The extras should satisfy fans of the flick.

Wrath of the Titans is now available on Blu-ray Combo pack, DVD and download!