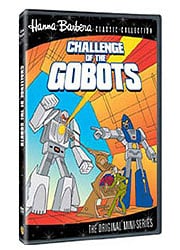 Challenge of the Gobots starts off with the evil Renegades Cy-kill, Cop-tur, and annoying Crasher going to Earth to start conquering the galaxy. You know, that whole plot to take over the world thing. Thankfully the Guardians, Leader-1, Turbo, and Scooter go to Earth to stop them. There, the Guardians get help from some humans and try to stop the Renegades. That’s basically all you really need to know about the cartoon.

As much as I like to poke fun at the series, it was still something fun to watch before or after school when I was growing up. I had the toys as well but then again, what toys back in the 80s didn’t I have?! I always liked Scooter because he can do cool hologram type of things. Ever since was a kid, I always hated Crasher. The voice was irritating and that laugh, it just makes me cringe. I definitely wish they went with another voice actress or just different route with Crasher. Animation-wise, it was pretty decent for a Hanna-Barbera cartoon. The last few releases from Warner Brothers Archive, the animation wasn’t exactly stellar but they were still watchable for the nostalgic factor. It’s funny watching this cartoon and hearing all the Star Wars and Tron sound effects being used.

This DVD from Warner Brothers isn’t the complete series, but it’s the first 5 episodes. I guess the series started out as a mini-series first? I think G.I. Joe started off that way. Gobots has about 65 episodes so hopefully fans will get to see the rest of the 60 in this form. Warner Brothers remastered the series so it actually looks better than how you originally saw it. I know I could tell the difference. For 5 episodes, I think the Challenge of the Gobots is worth buying if you loved the series growing up.