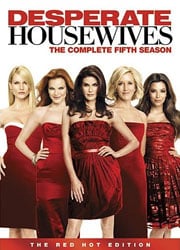 Desperate Housewives is one of those shows that have continued to draw me in season after season. Once you watch the first episode, the twists and turns make it difficult to stop. At first I thought this season would disappoint, but I’m happy that I was wrong.

The show begins with a five year leap in time. Everyone’s lives have changed on Wisteria Lane—some for better and some for worse. Bree now has her own catering business. Lynette’s twin boys have grown into disruptive teenagers. Gabrielle packed on a few pounds and has two daughters of her own. Susan also has a child and is dealing with her recent divorce from Mike. Edie gets a mysterious new husband who is disturbingly nice and adds the most suspenseful storyline. The five year jump may seem confusing at first, but the many flashback scenes will keep you filled in on the gap in time.

I thought this season was really good. I was hooked after the first episode and I loved the twists in plot throughout the season. During this season Desperate Housewives celebrated its 100th episode (watch the extras for a food fight at the 100th episode party). In my opinion, this is the best episode because it brings some depth to the characters and the guest star Beau Bridges plays a very likeable handyman.

I’m really excited to see the next season of this show because I have no idea where they’ll take it. In the final scene Mike is at the alter and you don’t get to see who he’s marrying. I love how the season ends with just enough closure, but still keeps you wondering what will happen next.

I felt the extras were pretty average. There were a few interesting ones, but the bloopers and deleted scenes didn’t thrill me. It was interesting to see the cast behind the scenes at a table read. I learned that Desperate Housewives is one of the only one hour programs to do this, so it was interesting to see. They also have an extra about Teri Hatcher, which is pretty good too if you are a fan.

All in all this was another really good season and I’m excited to see where they will go with the show after this. The only annoying part is that I’ll have to wait to find out who Mike ends up with.