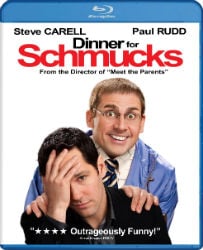 Tim (P.Rudd) is an executive who is hoping to climb the corporate ladder, and each month at his Boss’s monthly dinner party is an event in which he now must attend, and bring along a “unique person.” Basically a dinner where executives bring along a bunch of morons/schmucks/lunatics and use that platform to sit back and laugh at them. The nuttiest or wackiest guest is the winner and can mean good things for that executive in the company. When Tim accidentally runs into Barry (Carrell) with his car, he sees the potential in winning this contest, despite feeling conflicted about it. Dinner For Schmucks is a funny movie with a great overall cast, and nice moral story.

As the opening title sequence suggests, Steve Carrell’s character Barry is quite gifted at an odd hobby. IRS employee by day, dead mouse taxidermist by night. One day when Tim (Rudd) is driving home, he accidentally hits Barry in the road. Barry was on the ground picking up a dead mouse for one of his latest art pieces. Barry stuffs the mice, and than sets them up in funny and cute settings which is quite impressive despite it being a dead critter. Tim finds this quite odd and immediately gravitates toward the idea of bringing him to a dinner party he was recently invited to by his boss Lance, (Greenwood) which features a dinner full of “idiots.” Not a nice idea by any means but the Executives get a kick out of it as it were a competition in bringing the biggest idiot. Barry seems like the perfect fit for this. Barry is a divorced guy who is a tad eccentric and weird, with buck teeth and quite a pest to Tim, getting involved in his life immediately. Tim thought he would be in deep trouble with the car accident but Barry doesn’t see it that way and Tim goes with it. Tim’s intention at first are strictly get in the good graces of his boss and co workers with the dinner party coming up. At the same time, Barry gets Tim in trouble with his girlfriend with whom he is trying to marry and his girlfriend storms off to her Artist boss, Kieran (Clement) for support. He’s another odd dude who is Mr. Casanova who gets all the ladies since he is a “big artist.”

The film felt flat in spots during the 2nd act of the film, during which Tim and Barry are trying to track his girlfriend down to try and explain what has been going on. David Walliams of Little Britain co stars as Mueller, a Swiss Businessman who is looking to invest his money in Tim’s company and Tim has to sweet talk him in investing with the company. Actually quite a few great comedy actors are featured in the film like Jemaine Clement of Flight of the Conchords along with Kristen Schaal who plays Tim’s assistant. Zach Galifinakis who seems to be everything these days continues his funny streak as he plays a co worker of Barry and is also invited to the party as he has the ability of “mind control” on people. Jeff Dunham, Ron Livingston and Chris O’Dowd (The IT Crowd) round out the supporting cast in the comedy.

Dinner For Schmucks was funny in spots but also felt like it dragged in a few places. With a cast that includes some of UK’s finest in comedy alongside US stars Carrell and Rudd it would have had more laughs than it did. Still, a very “cute” film with a nice message that people are all different and we shouldn’t make fun of them, or at least without them knowing it. The extra features were cool especially the The Men Behind the Mousterpieces, which is impressive in and of itself in the film. The set pieces and situations they are set in are very cute and funny. The Chiodo Brothers also worked on Team America for the South Park guys. Deleted Scenes and the Gag reel were pretty standard fare as well. The film looked great in HD, which shouldn’t be any issue with the newer films released on Blu Ray. Everything that is recently released shouldn’t be even analyzed but I guess you have to right? Wrapping up, I enjoyed the film a lot and glad to see so many funny people in one movie.

Features:
The Biggest Schmucks In The World: Behind the Scenes with the Cast
Deleted Scenes
The Men Behind The Mousterpieces: Bringing Barry’s Dioramas to Life
Outtakes Reel

Bottom Line: Funny film that lacks in certain sections of the film but Rudd and Carrell do a great job on screen together again.
Rating: PG-13
Running Time: 114 mins
Extras Rating:
Overall Rating: 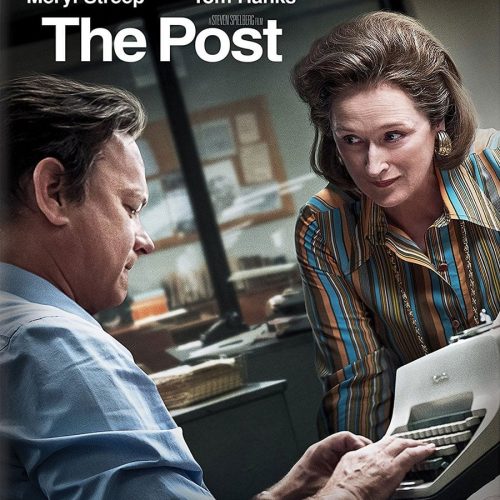