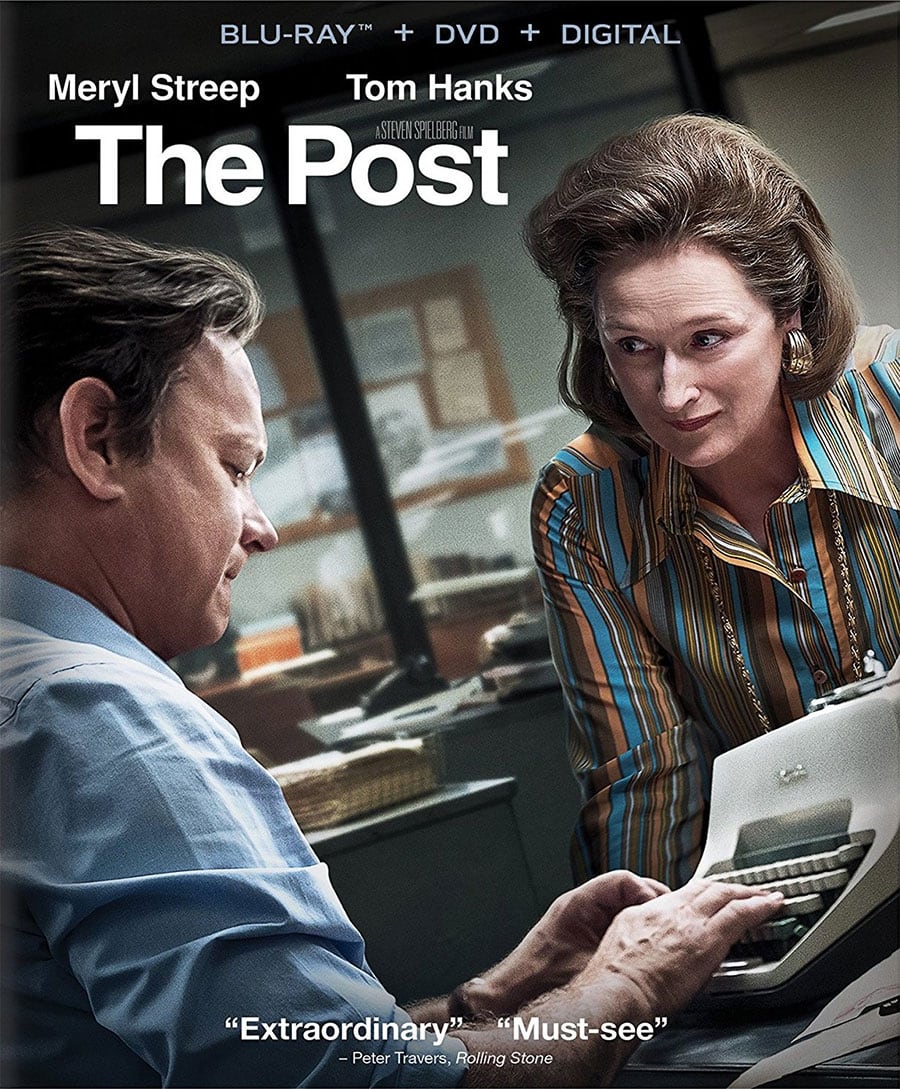 The Post is the latest Spielberg movie that is an important one. The story is quite fitting for what’s going on in politics right now as well. Not only is it about freedom of the press, collusion, illegal wars, etc., it’s also about a high-ranking woman working in a male-dominating industry. For whatever reason, people didn’t seem to warm up to The Post that much but I think everybody’s crazy…this movie was excellent and one of the best films in 2017.

The movie’s focus is around the Pentagon Papers, a study about the Vietnam War and how it was determined that it was an illegal and unwinnable war. The cover-up spanned 4 presidents and was leaked by Daniel Ellsberg (Matthew Rhys). The New York Times originally tried to release the documents until President Nixon put a monkey wrench on that. The Washington Post, which wasn’t a widely known newspaper at the time, got their hands on the papers and decided to run with it. The movie’s other main focus is about The Post’s publisher Katharine Graham (Meryl Streep) and hard-nosed editor Ben Bradlee (Tom Hanks). Graham has to deal with being a woman in a man’s world and trying to run the company the way she wants it to be run. The two debate with themselves, the staff, and others to see if they should release the papers and risk losing their careers and even being thrown in jail.

Since this was before my time, I never really knew much about the Pentagon Papers or about the Washington Post’s part in it. I knew of the Watergate and All the President’s Men, but nothing about this. The Post was definitely one of my favorite movies of the 2017 and thought it deserves more recognition than it got. A lot of people thought it was just okay and something you quickly forgot about. I didn’t have that view at all. It’s an important movie about history. It’s also an important movie that came out when the media were (and still are) being attacked for covering things, and women in the workplace and what they have to do deal with. Between Nixon and the current clown in office, it seems like history is repeating itself. Hopefully Trump’s time in office will have the same result as Nixon’s presidency. The Post covered many grounds and I thought it was an excellent, timely movie with such an amazing ensemble cast.

You got Meryl Streep in her first starring role in a Spielberg movie, and Tom Hanks acting alongside her as well for the first time. Why haven’t we had those two in a movie before? They were great together so hopefully this isn’t the only movie we get of Streep and Hanks. We got another Bob (Odenkirk) and David (Cross) reunion as well! The rest of the cast was just as good as everybody got a moment to shine. Spielberg is still my favorite director of all time and he just continues to release such excellent stories. He knows how to get the most out of his actors and got some interesting shots. For the most part, this movie is pretty straightforward and not a lot of fanfare. I haven’t seen Ready Player One yet but I’d imagine this was the opposite of that movie.

The Blu-Ray has 5 featurettes, broken up into different categories. The first one is about Katharine Graham, Ben Bradlee and the Washington Post. Family members and crew talk about Graham and Bradlee and their roles at the paper. The cast and crew featurette has interviews with the cast about their roles, but Spielberg and others discuss the characters. He also mentioned they got almost every one of their first choices for the parts, which seems rare. Guess everyone wanted to work on the movie with him, about this particular subject. Bob and David were wondering the entire shoot if Spielberg knew they were comedy partners or not, and didn’t even realize it until Tom Hanks brought it up halfway through shooting. They were afraid he wouldn’t want these two comedians being in a serious movie or not but he was cool with it. The next 2 featurettes are about filming and recreating the era that the movie takes place in. Former or current employees of The Washington Post were amazed at how close they got the look of the offices of the paper. The final featurette was about the legendary John Williams and conducting the score. Only Williams can make printing newspapers exciting with his score. Can’t believe how many scores Spielberg and Williams have done together. Just can’t find that type of working relationship elsewhere in Hollywood.

The Post is a timely movie on multiple levels. It’s got an amazing ensemble and the story is an important one too. Not sure why the movie didn’t get as much recognition as it should but I thought The Post was one of the best movies of 2017.

Features:
Layout: Katharine Graham, Ben Bradlee & The Washington Post
Editorial: The Cast and Characters of The Post
The Style Section: Re-Creating an Era
Stop the Presses: Filming The Post
Arts and Entertainment: Music for The Post