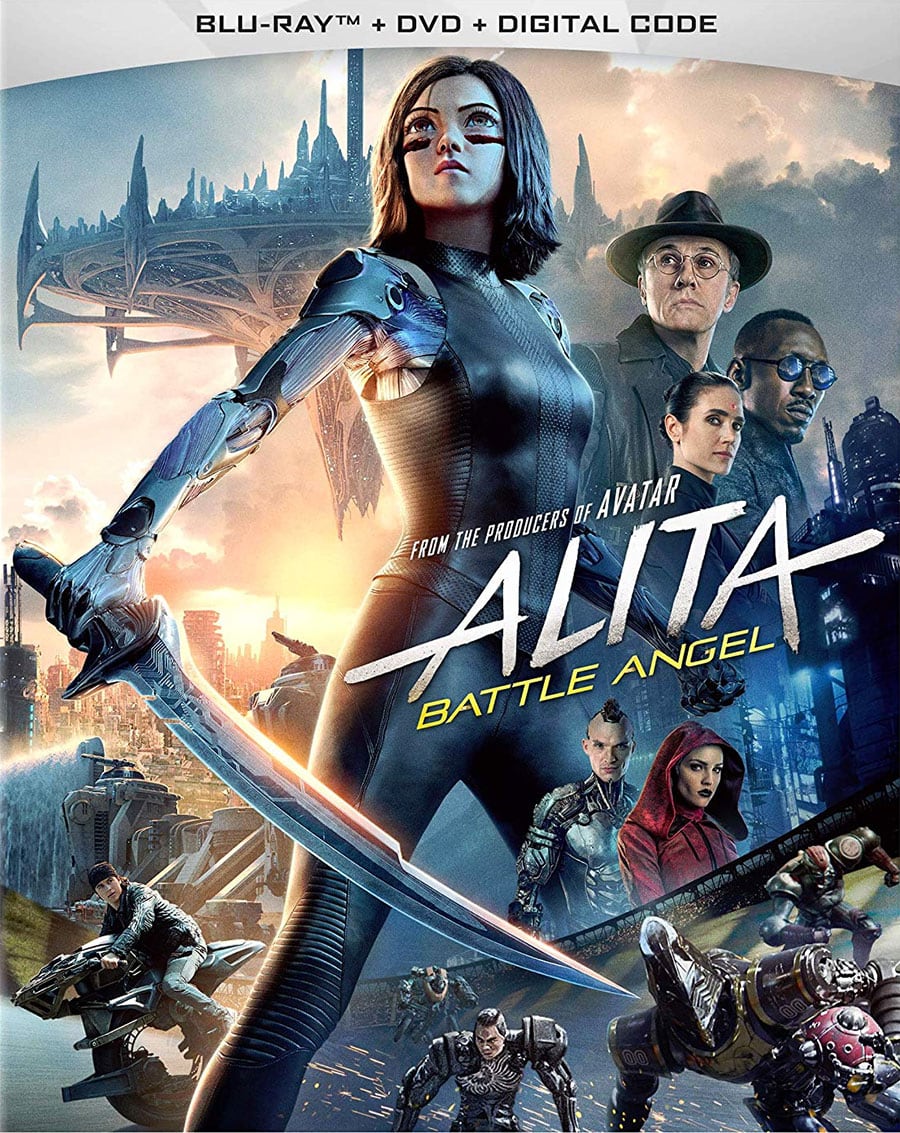 Alita: Battle Angel, the movie I had no desire to see in theaters is now out on digital and Blu-Ray/DVD. The movie is pretty cool, with strong special effects, and interesting story.

The movie set in 2563, 300 years after the Earth was destroyed in big intergalactic war. Scientist Dr. Dyson Ido (Christoph Waltz) discovers a female cyborg in the rubble and decides to name her Alita (Rosa Salazar) after his deceased daughter. She awakens with no memory at first, and befriends Hugo (Keean Johnson). After getting acquainted, he introduces her to a battle royale game called Motorball. Soon after, Alita learns that she’s gifted in the art of fighting and the only time she remembers things from her past is when she’s fighting. She decides to sign up as a Hunter-Warrior goes up against bad cyborgs and a criminal entrepreneur Vector (Mahershala Ali).

I literally had no idea what this movie was about and the main factor on why I wanted to check it out was James Cameron and Robert Rodriguez working together. I’m not a fan of anime or Manga at all, but I still found myself enjoying this movie. Perhaps since it was Americanized a little bit and made into a steampunk/sci-fi movie made me like it. The main selling point in the special effects of course but it does have that feeling like you’re watching an animated movie (ie. Ready Player One) at times. I guess it all depends on your level of enjoyment when it comes to SFC heavy movies.

I liked the stuff with Alita dealing with her past, her interactions with Dr. Ido, and battling the other cyborgs. The stuff with Hugo was meh to me and wasn’t really interested in seeing some cyborg/human love story. The acting was decent with Rosa Salazar and Christoph Waltz leading the charge. Mahershala Ali was good of course, Jennifer Connelly was underused, and Ed Skrein played the cyborg Zapan well. Jackie Earle Haley was unrecognizable as Grewishka.

I think the movie’s main problem is the story and the ending. Based on what James Cameron said about his original script, Robert Rodriguez had to whittle 600 page script down to like a 2 hour movie. I think a lot of the basics were missing from the movie and left you confused right in the beginning. The ending felt like there was no pay-off at all and assumes there will be a sequel, which who knows will even happen. The main selling point of this movie though is the special effects, which were done so well. I thought the big giant eyes would be a distraction but I got used to it after awhile.

The Blu-Ray has a bunch of featurettes for you to watch after you see the movie. There’s little featurettes going into Alita’s World, and the back stories on those. Ya know, something that should have been in the movie itself. There’s a good featurette on turning the popular Manga graphic novel to the big screen. James Cameron and others met up with the Yukito Kishiro, who created the Manga. There’s lots of other featurettes the Evolution of Alita, motorball, a London Screening Q&A, and a few other things. Alita itself looked great on Blu-Ray, and I’m assuming it would have looked even better on 4k.

Alita: Battle Angel was pretty decent and I enjoyed the movie for the most part. I thought the ending was weak and felt abrupt. I was surprised I like this since i’m not a Manga or anime fan but it’s just a mostly entertaining sci-fi/cyber/steampunk kind of movie. The special effects were outstanding and this will probably be nominated for some type of awards when the season comes. Even though the movie didn’t make a ton at the box office, don’t write it off. Give it a shot, you might really like this.