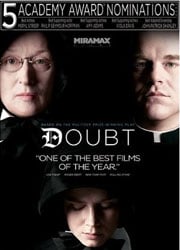 I wanted to see Doubt clearly for the actors’ performances. I didn’t really have any desire to see it based on the plot, which I didn’t know about. But after I saw Doubt, I thought the story was quite topical, and the performances from Meryl Streep and Philip Seymour Hoffman were excellent.

Doubt was adapted by John Patrick Shanley’s play Doubt: A Parable and he also directed the film. Doubt is set in 1964 at a Catholic School in the Bronx. St Nicholas’s has accepted their first African American student, Donald Miller, into the school. He’s the butt of jokes and gets teased by the other boys, but that’s not really the center point. One of the progressive priests, Father Flynn (Philip Seymour Hoffman), takes an unusual liking to the altar boy. The close relationship gets noticed by young nun Sister James (Amy Adams), who brings this insight to hard-nosed Principal Sister Aloysius (Meryl Streep). Sister Aloysius vows to take down Father Flynn for (perhaps) taking advantage of Donald, even if it means ruining a Priest’s career and exposing the truth for everyone to know.

For being a very-talky movie, Doubt still keeps you on the edge of your seat. Did Father Flynn touch the boy or didn’t he? Well of course I got my snap judgments on what really happened. I mean come on, altar boy, priest. That goes together like peanut and butter. But this was based on events that happened in the 60s, not now. If this movie took place now, I’m sure we’d be seeing a very different movie. Like I said above, I really wanted to see the movie for the performances. Meryl Streep and Philip Seymour Hoffman gave excellent performances, especially when they were acting in the same scenes. Hoffman came across as charming yet creepy at the same time. That’s especially hard to do but he pulls that off. And what was up with his fingernails? Man that was a little weird. Meryl Streep was really good, and pulled off that NY Bronx accent quite well. Amy Adams played her character very naïve, and pulled that off. Viola Davis’ brief appearance was scene stealing and really remarkable. Someone that can cry that much on cue, with snot going down your face is really hard to do. I wonder if she had a cold? That scene certainly got my attention.

The bonus features for the DVD include a few featurettes and audio commentary with John Patrick Shanley. I liked the featurettes “From Stage to Screen” and “Scoring Doubt.” I’m a big fan of Howard Shore so anything he does, I’m always interested in. Shore pretty much talks about working with John and the different themes he came up for the characters & scenes. Film score fans will like that part of the extras. There are enough extra features to hold over people that loved the film. There’s nothing really THAT special but they are worth watching if you wanted to know more about Doubt.

Doubt is an interesting film filled with wonderful performances and a very intriguing story. This film isn’t for everybody but if you’re in the mood for a great drama, Doubt is your movie!

Features:
– Doubt: From Stage to Screen
– Scoring Doubt
– The Cast of Doubt
– The Sisters of Charity
– Feature Commentary with Writer/Director John Patrick Shanley