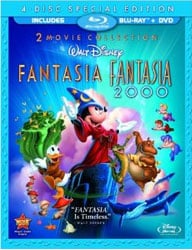 Fantasia might not be top on kid’s list for the best Disney movie but it was certainly an enjoyable animated movie that sparked my interest in classical music and film scores. I haven’t seen Fantasia 2000 until now but it’s just as enjoyable!

Fantasia is one of Disney’s masterpieces from 1940. The experimental film has brief live action shots with the orchestra, conductor and host Deems Taylor. There are animation segments that are set to classical music, and each segment has a different look and story to it. The first segment’s music is Toccata and Fugue in D Minor, the second is Nutcracker Suite, the third is The Sorcerer’s Apprentice, the fourth is The Rite Of Spring, fifth is an intermission, sixth is The Pastoral Symphony, seventh is Dance of the Hours, eighth and final segment features a mashup of Night on Bald Mountain and Ave Maria. The most famous out of those segments is Mickey Mouse in the Sorcerer’s Apprentice and Night on Bald Mountain.

Fantasia 2000 is set up similar to the original movie, except the animations styles are so vastly different each time. Plus, instead of having 1 host, there are a few celebrities that introduce the segments like Steve Martin, Bette Midler, James Earl Jones, Penn and Teller, Itzhak Perlman, Quincy Jones and Angela Lansbury. The music used in Fantasia 2000 is Beethoven’s Symphony No. 5 in C minor-I. Allegro con brio, Respighi’s Pines of Rome, Gershwin’s Rhapsody in Blue, Shostakovich’s Piano Concerto No. 2 in F Major-I. Allegro, Saint-Saëns’s The Carnival of the Animals, Finale, Dukas’s The Sorcerer’s Apprentice, Pomp and Circumstance – Marches 1, 2, 3 and 4, Stravinsky’s Firebird Suite – 1919 Version.

It’s been awhile since I saw Fantasia but it was nice to finally see it again, especially in hi-def! This isn’t necessarily flattery, but Fantasia is one of my favorite movies to nap too. It’s something about the combo of the classical music, the animation and Deems Taylor hosting that makes me sleepy. The animation is very iconic and quite stunning. It’s interesting to see what the animators did to make it flow with the music. Usually it’s the other way around and the animation is done first. My favorite piece in Fantasia could be either Nutcracker Suite or Night on Bald Mountain. I love the music to Nutcracker and seeing this as a kid helped me appreciate classical music. Night on Bald Mountain was bad ass for it’s time, and I think the look of the devil was amazing! I always remembered the devil and the wavy ghosts coming out from the grave. I always liked when Disney used to show this segment during Halloween time during the many Disney specials they used to do.

Fantasia 2000 is decent enough, but don’t think its as interesting as the original. While the animation is more updated, it’s something about it I don’t like as much as the original Fantasia. I liked the Rhapsody in Blue segment, Pomp and Circumstance and the Firebird Suite the most. The addition of the celebrities introducing the segments was a good thing though. I particularly liked Steve Martin introducing one of the first segments. But overall, I think Fantasia is the better movie.

If extras is something you crave, your better option will be the Blu-Ray of the movies. The DVDs don’t contain everything and only have 1 or 2 brief extras. The Blu-Ray extras contain DisneyView, a featurette on the Disney Family Museum in San Francisco, an excellent but brief documentary featurette about Schultheis’ notebook and a few other things. Schultheis was the special effects guy for Fantasia and documented practically everything for the movie. The notebook was thought to be lost but was found again and restored; which you can see in a cool interactive way at the Disney Family Museum. But if it wasn’t for this guy documenting everything, no one would know exactly how they did certain things in the movie.

The Fantasia 2000 extras on the Blu-Ray are great as well. You get the long talked about Destino animated short that was imagined by Disney and Dali, you get a feature-length documentary about that short, as well as a few other featurettes. It was interesting to see Destino and see the animators fulfill what Salvador Dali and Walt Disney imagined this to me. Being a big fan of Dali, I was really impressed with the short and loved watching the documentary as well.

Obviously Fantasia 2000 looks incredible on Blu-Ray and DVD since it’s only 10 years old, whereas Fantasia looks the best it’s probably going to look on home video. Buying both movies is a no-brainer and something that needs to be purchased if you love Disney and animation in general. 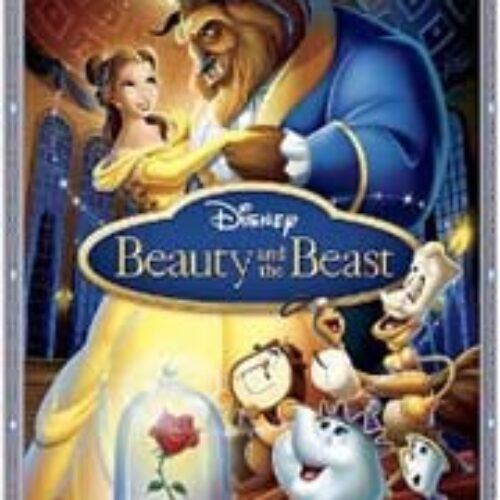