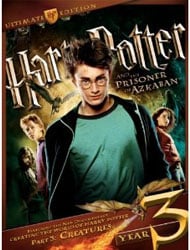 Looking back at all the Harry Potter movies, Prisoner of Azkaban could be my favorite of the bunch. Each film has things I like about it but as a whole, I think this one is the strongest to date. Unfortunately, this Ultimate Edition isn’t an extended edition and isn’t very ultimate either. More like “Special.”

I’ve already reviewed this movie and this DVD back in 2005, but I’ll briefly recap what happens in this movie. After getting angry at Aunt Marge for talking crap about his parents, and blowing her up as a ballon; Harry leaves the Dursley’s. As he’s walking away at night, he sees a scary looking dog watching him. But just as the dog starts to go near him, a Knight Bus picks him up and brings him to the Leaky Cauldron. The Minister of Magic is there waiting for him and tells Harry that he won’t be expelled for using magic outside of school. Harry learns that Sirius Black, a convicted supporter of Lord Voldemort has escaped Azkaban prison and might come after Harry. Meanwhile at school, Harry bonds with the new Defense Against The Arts teacher Professor Lupin and he teaches Harry to fend off those nasty Dementors that are guarding the school now. The main story lines of the movie is the impending death sentence to Hagrid’s hippogriff Buckbeak and Sirius Black going after Harry.

I think Harry Potter and Prisoner Of Azkaban is probably the first Harry Potter movie where it doesn’t feel like a children’s fantasy movie. The film, the actors, the style of the writing and the direction begin to grow up. Chris Columbus laid out the ground work for the first two movies and while I enjoyed those, the later films have been done ten times better. Sure, some things are missing still like the ghosts in the later movies, Kreacher storyline and some quidditch matches, but the stories have been solid throughout. My original complaints have somewhat diminished a little. I don’t think Michael Gambon is bad as Dumbledore, but I still prefer Richard Harris. Though, I don’t think Richard Harris, if he was still alive, would be able to do some of action stuff Gambon has done in the other movies. It’s a toss up but I’m happy with the final results. Even though I have complaints about the movies, I still really love them at the same time. I have to watch them at least once or twice a year.

This Ultimate Edition DVD isn’t really that special and still contains the original cut of the movie and the extras as well. I think the Blu-Ray is the same way but can’t confirm that. About the only thing you’re paying is the next edition of the documentary about Creatures. That’s about an hour long and it’s really great and in-depth. It’s nice to see how things were done, and see some new interviews with the cast & crew. I haven’t seen the first two ultimate editions so not sure how different they are. But watching this Creatures centric documentary makes me want to watch the other ones. I wish they would just include something like this in the original DVD & Blu-Rays, then people wouldn’t have to fork over more money. But essentially that’s what this is about, to make more money around the time the last movies are released.

When it comes down to things, are you willing to buy the same movie that was originally released but has one or two more extras on the DVD, a book and some cards? I don’t think so, unless you don’t currently own Harry Potter and the Prisoner of Azkaban.