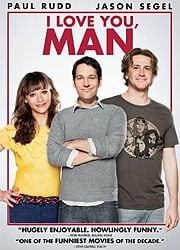 There has been a lot of talk about what movie is the funniest this year. Most of the stupid population will say that the funniest movie of the year is the over-rated and over-hyped The Hangover. While I think that movie has a few funny moments, I don’t think it compares to I Love You, Man!

I Love You, Man is about Peter Klaven (Paul Rudd), an LA real estate agent who just proposed to his girlfriend Zooey (Rashida Jones). They plan on getting married but Peter soon realizes he doesn’t have any guy friends. Most of the guys he knows are either related to him or just acquaintances at work. Peter decides he needs a best friend so he goes out on a bunch of man dates with strange men. As you can tell, most of them don’t go as well. While trying to sell Lou Ferrigno’s house, he meets a cool guy named Sydney Fife (Jason Segal) who’s an investor. Sydney says what he wants, and is just down to earth guy. The two hit it off and become friends, despite Peter constantly acting like a complete dork. Peter and Sydney bond over Rush, playing in a band, hiking, talking about sex…ya know, guy shit. But things start to get a little weird when Peter starts paying more attention to Sydney instead of Zooey. The relationship between Peter and Zooey begins to hurt because of Sydney and in the end, might ruin their upcoming marriage.

From start to finish, I laughed twenty times more than The Hangover. Better acting, funnier storyline, and one that you haven’t seen on the screen yet. A loser guy going on man dates with other guys? You can’t get much awkwardly funnier than that. This whole movie is very awkward to watch, thanks to Paul Rudd. Rudd was channeling Michael Scott from The Office and every loser who isn’t up on the times & catch phrases. Every time Paul Rudd opened his mouth, I was cringing. “Joben,” “Scutz McGutz,” I could go on forever with the amount of lame crap that came out of his mouth. But that’s what made the movie hilarious. Besides the great chemistry between Jason Segal and Paul Rudd (appearing in their 3rd movie together now); the supporting cast was great as well. Jon Favreau played a complete dick, it was nice to see Jane Curtin on the big screen again, J.K. Simmons’ deadpan approach to his lines was great. Believe it or not, Andy Samberg wasn’t bad in a movie. I usually can’t stand him but he was okay in this. He plays Peter’s gay brother, but is probably the most normal one out of the bunch. I loved seeing Rob Huebel in the movie as a bleached hair, spray tan dickhead real estate agent. The guy seriously needs a lead in a movie.

The extras for the DVD include a lot of extra scenes, deleted scenes, a funny gag reel and improved scenes. The “extras” featurette has the cast repeating the same lines, but changing it up which is really funny. You really have to be a great actor to come up with 10 different ways to say a line. Paul Rudd is especially skillful at this and the results are hysterical as to what he comes up with. One deleted scene that should have been included in the film was the State’s David Wain as a wedding photographer. He kept making the groom and the groomsmen do silly poses. It’s something all photographers should watch and then realize you shouldn’t do any of these types of poses. There’s definitely enough to watch in the extras and something not to be skipped if you enjoyed the movie.

I Love You, Man features a hilarious story, an excellent cast and a movie you’ll be quoting for years to come. Watch it on DVD or Blu-Ray now!

The Last Man On Earth, Brooklyn Nine-Nine, The Mick Canceled