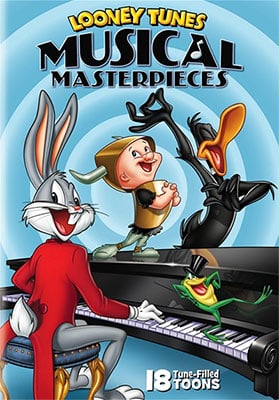 Warner Bros has re-packaged some Looney Tunes shorts in the past and they have done it again. This is a great compilation of musical shorts so if you don’t own any of these on the Golden Collections already, might be worth picking this up.

The Musical Masterpieces DVD release is timed well since the New York Philharmonic has been playing music from Looney Tunes at Lincoln Center. Unfortunately, I didn’t get to see those concerts but heard it was very good. At least I still have the animated shorts though!

The cartoons are sporadic but all music-oriented. You got the classic One Froggy Evening, which is probably one of my favorites of all-time. People love What’s Opera, Doc? but I’m never really cared for it. I love a lot of other shorts on here but just don’t like the one that everybody loves. Rabbit of Seville is more my speed. Another cartoon I loved when I was growing up was Three Little Bops. I still love seeing that cartoon, and the song is great as well. What I love about Looney Tunes is it probably got me into classical music and film scores.

There are 18 animated shorts in total, along with some bonus features. At least the DVD doesn’t just contain the shorts and there’s some other stuff to go along with it. No idea if the featurettes were used on other releases or not but they are here. There’s a quick one on One Froggy Evening, one on What’s Opera, Doc? and composer Carl Stalling. Stalling did so much music for Looney Tunes and I recently found out there are 2 albums of his sessions of Looney Tunes. Definitely worth checking that out if you loved the music on the shorts.

Even though I already have most of these cartoons, it was nice collection of musical oriented shorts. One Froggy Evening will always be one of my favorites, as well as the Three Little Bops. Hillbilly Hare, Rabbit of Seville, and Rhapsody Rabbit all stand out for me as well.

Features:
It Hopped One Night: The Story Behind One Froggy Evening
Wagnerian Wabbit: The Making of What’s Opera, Doc?
Merrie Melodies: Carl Stalling and Cartoon Music
Sing A Song of Looney Tunes