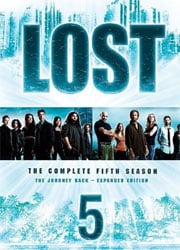 The best TV series of the decade is back on DVD and Blu-Ray for your viewing pleasure! Lost went in a trippy, time-traveling direction this season but the results were fantastic! No other show out there today makes me want to read up on fan sites and talk to co-workers the following morning about what happened. So when Lost ends this spring, I’m going to feel very empty inside. At least we’ll be able to enjoy this series on video!

Season 5 takes places between different years. Ben moved the island at the end of Season 4, The Oceanic Six (Jack, Kate, Sun, Hurley, Aaron and Sayid) plus Ben, Desmond & Penny are off in present time now. The survivors of the crash & the freighter people are still stuck on the island, but this time the island is acting all wacky and everyone is moving through time. In the present time, Jack and Ben try to reunite the Oceanic Six and have them go back to the island. Locke meets up with the island survivors and they travel through various times on the island. Locke figures out that he must be the one to move the island and fix everything. He manages to do so, and ventures off into present time to bring back the people that left. Meanwhile, the rest of the group like Sawyer, Juliet, Faraday, Miles, Charlotte and others are stuck in the 70s. They manage to infiltrate the Dharma Intuitive and become one of them, while waiting for Locke to return. Only problem is, Locke doesn’t return but the Jack, Kate, Hurley and Sayid end up in the 70s with the rest of the group. Sun, Ben, Frank and a new group are in the present time of the island, each with their own agendas. I’d go on and on about the storylines but there’s no sense. You’ll just have to watch, if you haven’t already!

Like I said before, what a season for Lost! The creators of the show still manage to give their fans something to talk about after each episode, and I can’t really say there’s a bad episode this season. Usually there’s a filler episode here and there in a season but I couldn’t find one. With the show winding down, every little bit of detail is important! That’s what I love about watching the episodes over again; because you pick up things you didn’t notice the first time around. The biggest thing I was trying to look for was the change in Locke’s personality. For instance, when does “Locke” change and if there were any clues that I missed the first time around. That last episode was a cooker! Fans finally got to see the real Jacob in the past, and how much of an impact he had some people’s lives. This next season is definitely going to be about Good vs. Evil, Black vs. White sort of thing. This Lost season answered a lot of questions for us, but also raised a ton more. I really hope most of the questions are answered when the series ends. I’m sure not all will be answered but I really hope the major ones are. I have no idea how this show will end but I’m sure there will be more deaths. I can’t even come up with a scenario of what I think would happen in the finale.

I really liked the Sawyer/Juliet storyline this year, as well as the Ben & Locke stuff. Season 5 saw Jack just become a douchebag. Hurley and Miles make for some great comic relief, as well as the stuff Sawyer said. I think the people that didn’t get enough screen time this season were Sayid and Desmond. They were there, but felt they could have used some more screen time. It was cool to see how the Dharma Intuitive worked and operated, and see everything back in 70s. But I hope everything is in present time in the final season. I’m sure when Jacob said “they are coming,” he either meant the Ajira Airways people or Jack, Kate & company. And who is his nemesis? Maybe this whole time Jacob was the good guy, and that guy was the bad guy? And what happened to Locke and why is Richard Alpert the way he is? I guess we’ll find out in Season 6.

Like with all Lost DVDs, there are plenty of extras to watch after you’re done with the episodes. There’s a cheesy “lost” Mysteries of the Universe show that looks like it was filmed in the 70s, and it’s about the Dharma Intuitive. They even have old NBC commercial in there. It’s kind of amusing but didn’t really offer anything new; at least I didn’t think so. The featurettes Lost on Location was good, as well as An Epic Day with Richard Alpert. Actor Nestor Carbonell goes from scene to scene, and then drives across Hawaii to film some night shots. He was a very busy man that day. He proves to everyone out there that his eyelashes are really dark, and he doesn’t wear eyeliner. He said he actually uses a concealer on them to hide the dark eyelashes. The bloopers were funny, and there were a few decent deleted scenes in there. I liked the scene between Locke and Sun, talking in the present day Dharmaville house.

All in all, this season was excellent. It offered up something new, exciting, mysterious and just very entertaining! There’s no other show like Lost, that’s for sure. I highly recommend buying this on DVD or Blu-Ray.

Features:
– Lost On Location – Get The Inside Stories From The Cast And Crew
– Building 23 & Beyond – Join Michael Emerson As He Infiltrates The Secret Lost Offices To Meet The Team Who Is Behind The Show’s Real Mysteries
– An Epic Day With Richard Alpert – Follow Nestor Carbonell Across The Island On The Intese Last Day Of The Season’s Finale
– Making Up For Lost Time – An Interesting And Humorous Look At How The Producers, Writers And Cast Sort Out The Survivors’ Leaps Through Time
– Mysteries Of The Universe: The DHARMA Initiative – The Recently Unearthed And Complete Expose Questioning The Truth Of The DHARMA Initiative
– Lost Bloopers
– Deleted Scenes
– Audio Commentaries