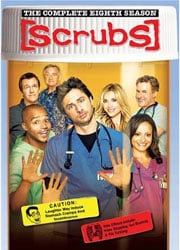 The 8th Season of Scrubs was bit different than the rest of the seasons. The season aired on ABC, and the focus on J.D. was quickly shifting away from him. But the show still successfully entertains loyal fans with comedy and drama. Whether or not this is the true final season of the show or not, it’s still something to watch and own on DVD.

The first episode of season 8 features a new Chief of Medicine, played by Courtney Cox. She’s a bit evil(er) than Dr Kelso and Dr Cox, and no one likes her. Dr Cox eventually gets the help from his former nemesis Dr Kelso and ousts her from the hospital. Dr Cox ends up becoming Chief of Medicine of Sacred Heart after all these years. You think he would be happy, but he’s actually the opposite. Meanwhile, J.D.’s patience is waning thin from his new interns, which include a bitchy, opinionated blonde girl (Eliza Coupe), a girl who’s always happy (Sonal Shah) and a lazy and overconfident guy who doesn’t really want to be there (Aziz Ansari). J.D. and Elliot finally get back together and realize they actually love each other. Turk and Carla still bicker about things and make up in the end of each episode. Later on in the season, we find out that they are expecting a second child. Other storylines for the 8th season include Ted getting a girlfriend nicknamed The Gooch (Keystone College alumni Kate Micucci), The Janitor marries Lady in the Bahamas, Turk and J.D.’s bromance gets weirder and weirder, and J.D. decides to move closer to his son and leaves Sacred Heart Hospital.

This season started off a little slow but definitely got better as it went along. There’s going to be a 9th season on ABC this year and it will mainly focus on the interns. I felt shifting the focus on the interns added some spark to the show. J.D. and the other main characters weren’t always the main focus and I liked that. They are now the mentors. The show still mixes wacky comedy with drama, which works for the most part. Sometimes the episode got a bit too serious at times. I felt the relationship with J.D. and Elliot seemed to come back too rapidly, and felt too sudden. I must have blinked and all of a sudden they are back in bed together. Maybe I wasn’t paying attention enough? I liked that Dr. Cox was finally Chief of Medicine and gave him something else to rant about.

The Bahamas episode was different for Scrubs but I ended up liking it. It was nice to see all the characters finally get out of the hospital for a change. Probably the only thing I didn’t really like was the ending of the finale. They were treating it like a series finale, which in a sense is the finale as most of the character won’t be returning full-time to the show. I think Turk and Dr Cox will be the only original main characters in the new season. Some of the characters will be guest starring though. But the finale just ended up being way too sappy and dramatic. I just wished it was handled differently. What’s the problem with J.D. moving away a half hour? Can’t do that commute to work?

The extras on the set include a Bahamas behind the scenes look, deleted scenes, alternate lines of certain takes, bloopers and the Webisodes featuring the interns. The behind the scenes look at Bahamas was interesting and fun to watch. Creator Bill Lawrence’s parents were in the episode since they live there. Bill also makes an appearance in the episode as the priest at the end.

This season of Scrubs brings more of the laughter and drama, and I think I liked this season better than last. It felt more like the earlier seasons to me, and the storylines involved the interns made things fresh again. I hope season 9 is just as good, if not better. Sure, J.D. won’t be the main character anymore but at least some of the original characters will still be on the show.