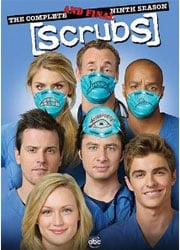 Technically Scrubs ended last year and this season was supposed to be called Scrubs Med but ABC didn’t go for that. The final season of Scrubs felt like a band reforming only the lead singer wasn’t in the band anymore. In a way, the show was ripping itself off and probably should have just stayed off the air. BUT, the season does offer some laughs.

The show doesn’t take place at Sacred Heart hospital anymore, but at the hospital’s medical school Winston University. Some of the doctors we’ve loved over the years are now professors at the school. The two main characters leftover from the show are Dr Cox (John C. McGinley) and Dr Turk (Donald Faison). J.D. (Zach Braff) and Elliot (Sarah Chalke) are now married and expecting their first child. Unfortunately, they are only in the show for 6 episodes or so.

The main focus is on a set of new clones, I mean characters. Lucy (Kerry Bishé) is the new J.D., where we get her perspective on things. There’s Drew (Michael Mosley), a former med student who’s giving it another go. He’s a Dr. Cox clone who likes to…talk really fast and talk exactly like him. It’s kind of distracting honestly. He begins a relationship with Denise (Eliza Coupe), the cranky pants doctor who doesn’t really have any emotions. One of the most annoying characters in Scrubs history is Cole, played by James Franco’s brother Dave. I’ll be honest, he ruined the show for me. I just wanted him to die or to shut up. Talks like he’s in the 90s, acts cocky and thinks he’s cool. The season was like other Scrubs seasons in that the younger people learned from the wiser, older doctors.

Unlike most Scrubs seasons, I actually watched most of these episodes when they aired. Which is kind of odd considering this was probably the worst season of Scrubs. I really don’t consider this season Scrubs and think of it as a spin-off more than anything. While it was nice to see Dr Cox, and Dr Turk teaching the younger med students and doctors, I just think the story-lines and episodes were scrapping at the bottom of the barrel. I knew watching this show would be canceled. I don’t even remember if the final seasons aired on TV or not. I think I gave up at that point towards the end. With the older characters, we cared what happened to them. The new ones I didn’t give two shits about. That random blonde Australian on the show I cared about, but for different reasons. I liked some of the episodes, but in the end, this season shouldn’t have be greenlit.

The bonus features for the DVD include a few featurettes, deleted scenes and bloopers. If you liked Scrubs, you MIGHT enjoy this season but more than likely you probably agree with me that this season was weak and copycat of itself. But what do I know, rent the season before buying and see for yourself.