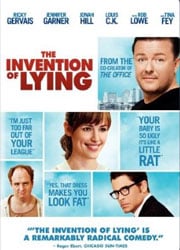 Ever wonder what the world would be like if nobody lied and told the truth? The truth hurts sometimes, but people can’t help but blurt out things that are quite blunt. In this alternate reality, there’s no such thing as fiction, which makes movie-making quite bland. They only do documentary style movies and TV shows. Mark Bellison (Ricky Gervais), an unsuccessful screenwriter who gets fired from lackluster scripts, discovers the special ability to lie to people. He uses it to get what he wants, wherever that’s money or getting his screenwriting job back. What he really wants though, is to be with the girl Anna (Jennifer Garner), who he originally went on a bad date with. She tells him flat out she doesn’t want to be with him because he’s chubby and has a weird nose. She’s the one person he can’t bring himself to lie to. Mark gets even more popular worldwide with his lying, but still struggles to get Anna to fall in love with him.

The I’vention of Lying is a mixture of comedy, drama and also happens to be wonderful satire on religion. I’ve liked Ricky Gervais as a comedian and actor since The Office and been a fan ever since. I truly believe he’s getting funnier with each movie. Ghost Town was pretty good but I feel I’vention of Lying blows that movie out of the water. I could watch this style of humor all day; just seeing people being blunt all day really amuses me. It doesn’t hurt either when you have an all-star cast including some nice cameos from Jason Bateman, Ed Norton, Philip Seymour Hoffman, and Ricky’s colleague Stephen Merchant.

I knew the movie consisted of telling the truth, but didn’t know it was going to be a religious satire as well. Being a fellow atheist, this was rather brilliant I thought. I’m not sure others will feel this way but I thought it was really hysterical when Ricky was explaining his rules (aka Ten Commandants). You should see how Ricky’s character looked after awhile, from being inside the house too long. That also cracked me up. But besides being a satire on religion, it’s also something else. The romantic comedy part of the movie was okay, but I probably could have done without it. But that whole plot is what drove the movie along. There were a lot of funny jokes with the date, and trying to get with someone. Jennifer Garner’s character had some excellent dialogue and jokes in there as well. Usually dating and relationships contain lying to some degree but you get to see how things are point blank. I don’t think I’d be able to handle it if this were really the case.

Other things in the movie that had me laughing were the signs outside of buildings or the advertising on buses or commercials. It felt like watching The Simpsons; for example the nursing home said “A Sad Place for Hopeless Old People.” That had me laughing for a good minute. The acting was really good, with Ricky Gervais standing out for his dramatic side as well as his comedic roles. The guy can cry on queue quite well! Other actors that stood out included Rob Lowe, Louis C.K. and Tina Fey. If I had to say anything negative about the movie, I’d say that I would have done away with some of the montages. I would have shown more of Mark making up lies about the “Man In The Sky.” But that’s really about it I think.

The DVD has a nice batch of special features like additional scenes, gag reel, a making of, video podcasts and more! It’s always fun to see Ricky Gervais cracking up in gag reels, especially since his laugh is great. The podcasts were cool to see, as well as the additional scenes and making of. I’m glad Warner Brothers decided to include some extras on here for a change. They are hit or miss when it comes to DVD extras.

All in all, The I’vention of Lying is both a great comedy as well as a great satire. I actually think the satire part of the movie is brilliant. Not everyone will like this movie but they’re probably either a prude or someone who doesn’t have a sense of humor when it comes to religion. Definitely see this before buying though. But if you had to take my word for it, I’d buy this DVD or Blu-Ray.

This is Spinal Tap rockin’ out on Blu-Ray July 28th