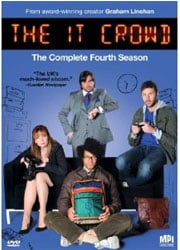 “Have you tried turning it on and off again?” The latest IT Crowd season may not be the best season of this UK comedy series but it’s still a very funny season!

The IT Crowd is about the IT department at a big corporation in London, England. Roy (Chris O’Dowd) and Moss (Richard Ayoade) are the IT department, with non-tech savvy manager Jen (Katherine Parkinson) rounding out the department. Their boss, Douglas Reynholm (Matt Berry) is a womanizing bonehead who’s always getting himself into trouble, personally and professionally. The fourth season starts off with an episode with Jen trying to do something else besides manage the IT department. She applies for an Entertainment manager in the company and soon finds herself having trouble of entertaining Douglas Reynholm’s business friends since she’s a woman and they want to see woman…naked. She turns to Roy and Moss for help. The rest of the season has episodes about: Moss appears on a popular game show Countdown and joins an elite Countdown club since he beat all records, Roy has an uncomfortable experience with a masseuse, Jen tells Reynholm that she speaks Italian and that eventually backfires, Roy is intrigued by his girlfriend’s parents’ deaths at a Sea Park, Moss and Roy skip out on work for a day, and Douglas Reynholm is taken to court by his thought to be dead wife.

Originally I thought this season of IT Crowd wasn’t as good as others but after watching it again; I realize it’s just as funny as any season. The first few episodes are very strong. I particularly like the 2nd and 3rd episode the best of the season. The “Bad Boys” episode was pretty hysterical too. The misadventures of Roy is what I crack up at the most. Seeing him not catch a break and getting into awkward situations is what I love about the IT Crowd. Seeing him trying to tell an old friend he isn’t a window cleaner was brilliant, and how each time he saw his friend, Roy’s case was against him. The first time I saw “Something Happened” and what happened during that episode, I don’t know if I ever laughed that loud as much as I did during an IT crowd episode. It just wasn’t expected. You knew something was going to happen, but not that. Of course Moss is just as funny as Roy, and Douglas Reynholm is outrageous as usual. I still kind of wish Jen would leave the show because I feel she’s the weakest link as far as characters are concerned. Her character just brings down the episodes sometimes. There’s only so much you can do with her character, on someone who doesn’t know computer stuff and doesn’t necessarily interact with Roy and Moss all that much. That’s just my opinion though.

Story wise, I think the show is starting to get into non-work stories more and not sure I like that as much as work related storylines. It’s okay to have a few episodes here and there that aren’t really work related, but that’s why I liked the show because it was an office related comedy series. Regardless of what I think of storylines for the episodes, I’ll still be watching if Roy and Moss are involved. Seeing those two characters in any situations is really funny.

The Season 4 extras includes featurettes on shooting on location, outtakes, some hidden extras and audio commentary with creator/writer/director Graham Linehan. The on location featurette was cool to see, and got a nice look at behind the scenes footage of them shooting the 2nd episode. The outtakes were obviously really good and hysterical. I would imagine trying to act out these roles would be tough, considering it’s just a hilarious comedy. I didn’t listen to the audio commentary just yet since I wanted to give the episodes another shot.

All in all, I laughed and laughed a lot during the fourth season. I still don’t think the season was as strong as the previous seasons but fans of the show will still appreciate this geeky comedy series from Graham Linehan. 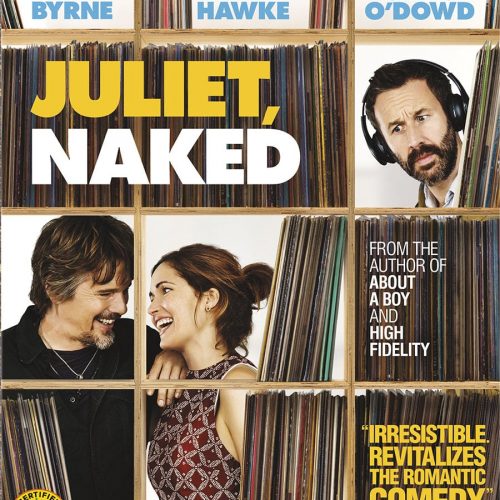