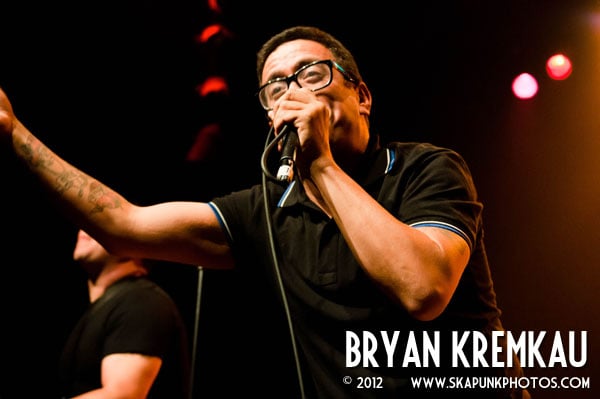 Okay, Another Edna’s Goldfish show!!!!! We get there at 7pm and no one’s really there so we sat in our car for a half hour waiting and we finally went in.

The first band was Right Turn Eddie from NJ. I had to go to the bathroom and I heard from the bathroom that the horns players were playing Big Bad Voodoo Daddy which I thought was cool. Since I don’t know any of there songs I don’t know what they played but I thought they played better this time than the last time I saw them. Edna’s Goldfish FINALLY shows up (they had me worried) and Right Turn Eddie got off.

The next band was Animal Chin from Minnesota and they were funny. He made funny jokes about jocks, rollerbladers( not smart since they were at a skater park/rink) and others stuff. They played songs that I have heard before like “Time Out” on Misfits of Ska 2 and another one that was on a Fueled By Ramen Comp. that we got at the Warped Tour last year. The Lead Singer was so funny and one thing that was funny was licking his guitar. Edna’s Goldfish and Animal Chin both did rip-off songs of each other which was interesting. What I liked also was that they got the crowd into it.
They got off( no, not that way) and then Siren Six came on. I liked the Trombone player, she was hot. BUT ANYWAY they played pretty good but I was not paying attention that much because we were hanging out with Edna’s Goldfish. David took my picture of him pointing to the crowd, it was all right since I had doubles.

Edna’s Goldfish finally got on and what a performance they played at Skater’s World. GET THIS! they didn’t played 6 songs, they played for 40 minutes. Matt and I were videotaping them and the tape came out good. They started off with “Story” and then played one of my favorite songs on their album “Justless.” Then they played “Purple” and went into “Perfect Days.” This was the first time that I saw their new t-bone player Ian but for some reason, he looked familiar to me. After that they played a new one called I think “Four Days in November” and I like this osng a lot. I like all of their new songs that they played like “Relate” (Animal Chin rip-off), “Harper Parker?” “Avoiding the Swerve” ( I Like this song out of all of all the new ones) and another good song called “Veronica Sawyer.” They really get the crowd into it when they play that song. Is it just me or does David always dance and barely plays the trumpet?? Either way, he still rocks! Other songs that they played were “Sunrise to Sunset,” “I’m Your Density (favorite),” ” Eventually Anyway,” and “This is not here.” I must say that they played one hell of a performance at Skater’s World and people are definitely going to like them at the Chance next Friday with The Scofflaws and Scagnetti. So that’s it..good show overall and stay tune for next weekend when I write another boring review for the Scofflaws show.