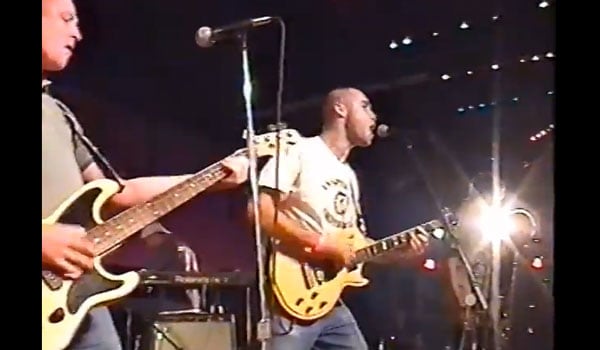 So finally a good band came on but Sgt. Scagnetti didn’t sound the greatest but it wasn’t them that made them sound bad; it was the sound system. They first played a good song called “Family Fun,” and then they played “27 Cents.” Dan the guitarist’s guitar was too loud and you couldn’t really hear the singer’s voice at all. They then played songs “Dirt Bike” “Animal,” ” and a short song about making it big called “California.” They then played a remix of the song “Android,” which was on their first tape with the old band members. They then played “Walking on Sunshine”, which a thousand ska bands play. “Hellspawn” was the next song and That’s my new favorite song that Scagnetti does. “Necro..” and “Sideshow were other songs that I enjoyed and danced to. There was some tall stupid kid there that thinks he’s all tough and stuff. He was moshing and crowdsufing and I wanted to knock his ass on the ground.

ANYWAY.. After them were the oi! boys from Montana The Skoidats. They started thier set with “Whirlwind” and then they played a lot of jazzy, slow ska songs which were all right but I didn’t feel like dancing too. They played some new songs that I think they mayhave a new album out in the future. They played a song called “Skinhead Revolt” and then they played “Saturday Skins” and all the skinheads in the crowd went crazy for that one. Then they played another good song called “Granted.” I got out of the crowd because all the skins were going nuts and my body couldn’t take it. Their last song was “Beer, Beer, Beer” and the whole crowd went up to the front to sing along to that one.

Inspecter 7 took the stage at midnight and my brother and I were both very tired so we weren’t going to stay the whole set. There was four horn players and only one mic that they could use. They started their set off with “Spy Front” and then they played good songs like “Regret,” “Brother vs. Brother” and a new song which probably should be on their new album called “the game.”(sorry to Giuseppe for making his tatoos look crappy) They then I think they played “Channel 7” and then we left sorry to say because Inspecter 7 was playing really good. So that’s it folks!!!