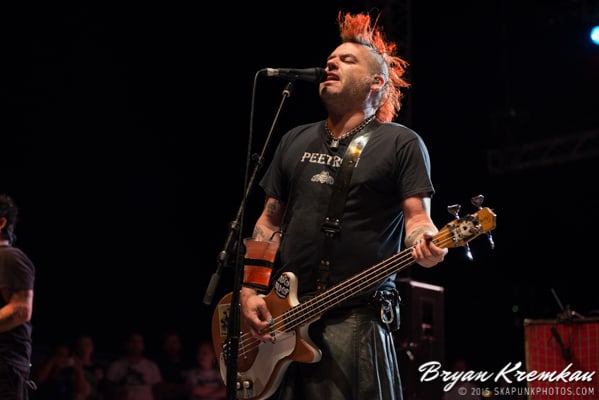 NOFX played at the The Fillmore at Irving Plaza in NYC Wednesday night to a sold out crowd. Everyone was there to see some fun punk rock music and NOFX definitely delivered. The band is currently on tour and playing other dates in Long Island, NJ and other cities as well. I wanted to see them play the first night of their NY dates, just because there wasn’t much on TV that night. Of course, I ended up missing an important debate but I listened to it on the ride home on XM. Yes I base my decisions on shows on whether or not there is good TV on that night. But then again, there’s always DVR.

When I arrived to the club, I waited on line and saw that 4 bands were playing. I originally thought there were only 3 bands so I knew I was gonna be in for a long night. Shiragirl from Brooklyn was the first band. I never heard of them before until eMily reviewed the Rancid show with them opening. I didn’t know any songs but they were all right. Wasn’t really my thing and I didn’t really care for the hip hop influenced songs. Just didn’t mix well in my opinion. The singer Shira had a lot of energy and tried to get the crowd moving, but it only seemed to work on a few songs.

After Shiragirl, were Fat Wreck Chords bands The Flatliners and Dillinger Four. The Flatliners hail from Toronto. I have yet to hear anything from them (someone else reviewed the album I think) but I liked what I heard during their set. They have a punk/reggae sound but for the most part, they are a punk band. There’s nothing really else to add except I thought they were good.

Dillinger Four have a new album Civil War out on Fat Wreck Chords now and the album was 2 years in the making. This was the first time I saw them live though. They have been around since ’94 and have albums out on Hopeless, No Idea as well. I probably heard their stuff on some compilations from Hopeless but I honestly don’t remember. I liked their set as well, even though I didn’t know much from them. They had a lot of funny introductions, especially from Patrick Costello. He was saying he was an old R&B singer and then talked about Sarah Palin not getting a chance to speak in the media. I couldn’t tell if he was serious or not but some people were screaming at him for that one. The band played well and most of the crowd was into them. But I think everyone was getting antsy to see NOFX. I know I was.

NOFX came out and the crowd went crazy. The band decided to talk about New York City a little bit and then went into Dinosaurs Will Die off the Pump up the Valuum album. I was in the photo pit for the first 3 songs and I was singing along and taking pictures. The bouncers had to do some work and get a few crowd surfers coming over the barricade. The weed was in full force this show and big puffs of ganja smoke was floating over the crowd. The smoke was so thick, I thought I was going to get the munchies. I honestly don’t know how you people can smoke that shit.

Fat Mike and the rest of the band were hilarious like usual. The fans were obnoxious and throwing water bottles at Fat Mike and the rest of the band. Of course he had a great comeback for everything. Fans were flipping him off, which I don’t get because if you were there to see them, why the hell would you want to piss off the band? At one point someone tossed up a WWE belt and Fat Mike put that one. He had to get duct tape to make it stay though. I wish that happened during the first 3 songs but of course that’s how things go in the music industry these days concerning concert photography. But back to the music…

The band played other great songs like Murder the Government, Stickin In My Eye, Seeing Double at the Triple Rock, Leave it Alone, Bob, Franco UnAmerican, and Linoleum. I really wanted to hear All Outta Angst but not sure if they played it or not because I left an hour into their set. I had to work the next morning and had an hour and half drive back home. So I had to miss some of their set since the band went on so damn late. I was glad I heard Franco UnAmerican and Linoleum though. It would have been cool to hear Don’t Call Me White or Kill all the White Man but perhaps next time I will get to hear that live. I’m not sure what songs they were, but the band played a few slower punk/reggae songs. Since I’m still fairly new in liking NOFX, I have no idea what songs they were. Perhaps old ones?

With the funny banter between Fat Mike, El Hefe and the great punk rock songs, NOFX is a fun show to see. The crowd can be annoying at times, but what do you expect when you have some white hats in the crowd. One thing I noticed with NOFX fans is they are the biggest offender when it comes to being that guy. You know the guy. The guy that wears the band shirt of the band he’s going to see. DON’T BE THAT GUY! Other than that, I enjoyed this show even though I think it would have been better with 1 or 2 bands short. My old man feet can’t handle 4 bands anymore.