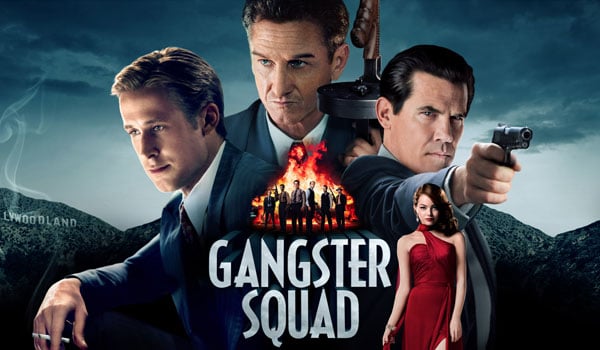 I like me a good old fashion gangster movie! Who knows if this is any good but has a decent cast. Gangster Squad will be out on Blu-Ray and DVD on April 23rd from Warner Brothers. The Blu-ray Combo Pack includes almost two hours of never before seen bonus features.

Burbank, CA, March 6, 2013 – It’s a war for Los Angeles in “Gangster Squad,” arriving onto Blu-ray Combo Pack, DVD and Digital Download on April 23 from Warner Bros. Home Entertainment Group. A stylish retelling of true events, “Gangster Squad” follows a team of cops as they band together to bring down a ruthless mob boss— by any means necessary.

Los Angeles, 1949. Ruthless, Brooklyn-born mob king Mickey Cohen (Sean Penn) runs the show in this town, reaping the ill-gotten gains from the drugs, the guns, the prostitutes and—if he has his way—every wire bet placed west of Chicago. And he does it all with the protection of not only his own paid goons, but also the police and the politicians he has under his thumb. It’s enough to intimidate even the bravest, street-hardened cop…except, perhaps, for the small, secret crew of LAPD outsiders led by Sgt. John O’Mara (Josh Brolin) and Sgt. Jerry Wooters (Ryan Gosling), who come together to try to tear Cohen’s world apart.

On April 23, “Gangster Squad” will be available for download from online retailers including iTunes, Xbox, PlayStation, Amazon, Vudu and CinemaNow.

The film will also available digitally in High Definition (HD) VOD and Standard Definition (SD) VOD from cable and satellite providers, and on select gaming consoles.

*UltraViolet allows you to collect watch and share movies and TV shows in a whole new way. Available with the purchase of specially marked Blu-ray discs, DVDs and Digital Downloads, UltraViolet lets you create a digital collection of movies and TV shows. Services such as Flixster and VUDU allow you to instantly stream and download UltraViolet content across a wide range of devices including computers and compatible tablets, smartphones, game consoles, Internet-connected TVs and Blu-ray players. Restrictions and limitations apply. Go to ultraviolet.flixster.com/info for details. Learn about VUDU compatible devices at vudu.com.