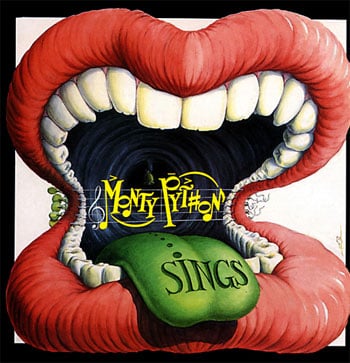 Once I saw Monty Python and the Holy Grail for the first time, I was hooked! I then started to watch Flying Circus and got even more hooked; then I got an album called Monty Python Sings. It had all the best songs from Python on it and I still listen to it frequently now. It’s going to be re-released, re-mastered and also will have some new material on it as well! My hovercraft is full of eels!

Monty Python’s classic album is now bigger and better than ever! Celebrating the 25th anniversary of its original release, Monty Python Sings (again) is now re-mastered and re-sequenced.

The 1CD & 2CD deluxe albums feature songs and ditties drawn from across their illustrious recording, TV and film career (1971-1983). The new versions include brand new tracks specially recorded by Eric Idle, long-forgotten gems from the Python archives, remixed Terry Gilliam cover artwork and a 32-page booklet with notes by Robert Ross from new interviews with the Pythons. The 2CD deluxe edition comes with a bonus disc featuring their debut album, Monty Python’s Flying Circus (recorded live at Camden Town Hall in May 1970).

Here’s a new song you’ll be hearing on that album, or at the concerts in London.