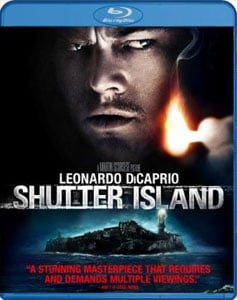 Shutter Island will be coming out on DVD and Blu-Ray on June 8th 2010 from Paramount Home Entertainment. I saw the film in theaters and thought it was good, but I thought it was a bit predictable. You just knew something was up from the beginning. Based on the trailers and commercials, you can pretty much figure out the plot and ending.

HOLLYWOOD, Calif. – World-renowned director Martin Scorsese delivers “a stunning masterpiece that requires and demands multiple viewings” (Ain’t It Cool News) with the critically-acclaimed suspense thriller
SHUTTER ISLAND, debuting on DVD, Blu-ray and VOD June 8, 2010 from Paramount Home Entertainment. Starring three-time Academy Award® nominee Leonardo DiCaprio (The Departed), the film features an outstanding ensemble cast including Mark Ruffalo (Zodiac), Oscar® winner Sir Ben Kingsley (Gandhi),
Max von Sydow (Minority Report), Michelle Williams (Brokeback Mountain) and Emily Mortimer (Match Point). Based on the best-selling novel by celebrated writer Dennis Lehane, SHUTTER ISLAND was written for the screen by Laeta Kalogridis and tells the story of two U.S. marshals investigating the mysterious disappearance of an inmate from a hospital for the criminally insane. But as their investigation proceeds, they uncover an intricate web of deception where nothing may be as it seems. Filled with nail-biting suspense and unexpected plot twists, SHUTTER ISLAND is a must-see thriller that will keep you guessing to the very end.

The SHUTTER ISLAND Blu-ray includes making-of featurettes entitled “Behind the Shutters” and “Into the Lighthouse”. Music from the motion picture is available now from Rhino Records at all physical and digital retail outlets. The haunting double disc set was produced by music legend and frequent Scorsese collaborator Robbie Robertson and features a stunning array of modern classical music.

o Behind the Shutters—Follows the film from its inception as an acclaimed novel through the production process and to the big screen. Includes interviews with cast and crew.

o Into the Lighthouse—Discusses the historical landscape of psychiatric therapies during the 1950s through interviews with cast and crew.