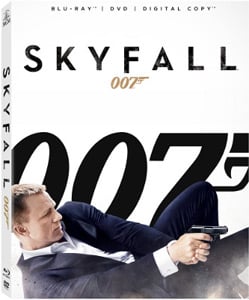 One of the best James Bond movies, Skyfall, will be out on Blu-Ray and DVD February 12th from MGM/Sony/Fox. It will be out on Digital HD on February 5th. I thought Skyfall was great and can’t wait to see it again on Blu-Ray. I’m hoping there is some sort of trilogy set that will be released too since I don’t own any of the other Bond movies on Blu-Ray.


Box-office smash, SKYFALL, will soon be available to own in high-definition, it was announced today by Metro-Goldwyn-Mayer Studios, Sony Pictures Entertainment and Twentieth Century Fox Home Entertainment. SKYFALL will release on Digital HD February 5th across all digital stores including Amazon, CinemaNow, iTunes, PlayStation, VUDU and Xbox Live. The SKYFALL Blu-ray and DVD will follow on February 12th in North America and February 18th in the United Kingdom with additional international markets to follow through March.

The theatrical debut of SKYFALL capped a year-long celebration of James Bond’s golden anniversary. Honoring 50 years since 007 first appeared on-screen, the global campaign was highlighted with the release of BOND 50, a collectible box-set featuring all 22 James Bond films on Blu-ray Disc for the first time in one complete offering. The box-set includes a placeholder for SKYFALL so consumers can complete their 50th anniversary collection.

In SKYFALL Bond’s loyalty to M (Judi Dench) is tested as her past returns to haunt her. With MI6 now compromised from both inside and out, M is left with one ally she can trust: Bond. 007 takes to the shadows – aided only by field agent, Eve (Naomie Harris) – following a trail to the mysterious Silva (Javier Bardem), whose lethal and hidden motives have yet to reveal themselves.