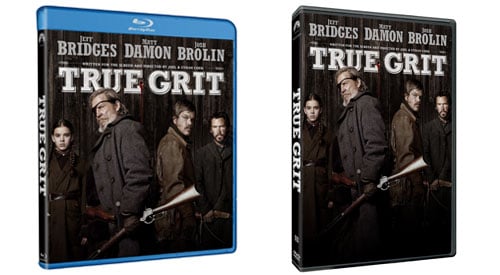 The Coen Brothers’ Oscar nominated remake of True Grit will be out on Blu-ray/DVD Combo with Digital Copy and standalone DVD on June 7, 2011. There will be over an hour of Special Features as well! I haven’t seen the movie yet but I really want to. I’ve loved the last few Westerns that have been out and think this one will continue the streak of great Westerns to have come out in the last 10 years. Read the press release below:


HOLLYWOOD, Calif. – “A great film that will stand the test of time” (Film.com), Academy Award®-winning directors Joel and Ethan Coen’s (No Country For Old Men) “vastly entertaining” (Rolling Stone) and epic tale of frontier justice TRUE GRIT debuts in a Blu-ray™/DVD Combo Pack with Digital Copy and on standard DVD June 7, 2011 from Paramount Home Entertainment. The gritty and memorable film has been embraced by audiences and critics alike, earning over $165 million at the U.S. box office, nominated for 10 Academy Awards and named by more than 75 reviewers as one of the top 10 films of the year. Jeff Bridges stars as Rooster Cogburn, an irascible U.S. Marshal hired by a 14-year-old girl (newcomer Hailee Steinfeld) to bring her father’s killer (Josh Brolin) to justice. Matt Damon is an overzealous Texas Ranger who is also tracking the killer, hoping to capture him and bring him to trial for another murder.

The TRUE GRIT Blu-ray/DVD Combo Pack with Digital Copy includes over an hour of extensive behind-the-scenes featurettes exploring the cast and cinematography of the film, the period costumes and guns, a fascinating portrait of the brilliant but reclusive novelist Charles Portis and more.

The Blu-ray/DVD Combo Pack contents are as follows:

o From Bustles to Buckskin—Dressing for the 1880s

o The Cinematography of True Grit

o From Bustles to Buckskin—Dressing for the 1880s