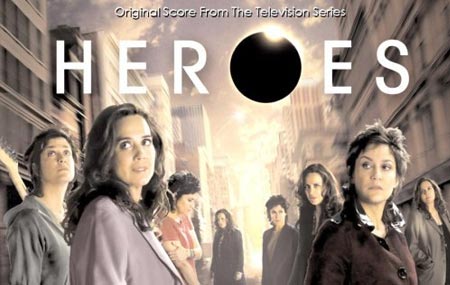 First they saved the cheerleader and saved the world. Now the Heroes have another assignment – this time on CD. La-La Land Records will release the original score album on April 7, 2009 via their website and in stores April 21. Wendy and Lisa (Soul Food, Crossing Jordan) composed the original score. La-La Land Records is releasing the “Heroes” score album through a license agreement with NBC Universal Television, DVD, Music and Consumer Products Group.


In 2006, audiences were intrigued by six words … “save the cheerleader, save the world.” The first season of Heroes featured ordinary people with extraordinary powers. The cop who can hear your thoughts, the flying nurse, the drug addict who could see the future, and the Japanese man appropriately named Hiro who could bend time and space were amongst those whose mission became saving the cheerleader. Each character is drawn into the ‘Company’s’ conspiracy to control these super-powered people .

The “Heroes” original score album features ten powerful tracks, including the “Heroes” title and the memorable “Fire & Regeneration” theme. Each of the additional tracks is built around one of the heroes, and carries the instrumentals and rhythms that are particular to that character – such as the heroic, strong cello sounds for “Peter Petrelli” (Milo Ventimiglia) and the dreamy instrumentals of the fire and regeneration cue for “Claire Bennet” (Hayden Panettiere).

The last two tracks on the album, “Kirby Plaza” and “Fire & Regeneration,” are sure to evoke familiar scenes for the listener. “Kirby Plaza” is the final, fiery conclusion to Season I, when “Peter Petrelli” (Milo Ventimiglia) explodes over New York City. “Fire and Regeneration” is the recurring theme for “Claire Bennet” (Hayden Penettiere) and according to Wendy and Lisa, is “…hands down the very favorite among fans.” They consider it to be “the sound of Heroes – the cue that gave us the direction for the series.” The entire track listing is below.

Childhood friends Wendy Melvoin and Lisa Coleman each grew up in musical families. Lisa joined Prince’s touring band in 1980. She recommended Wendy when another player left the group in 1983. Prince agreed and they began working on Purple Rain. The film and album were both smash hits and Prince’s touring band was renamed The Revolution. Wendy and Lisa worked with Prince on the follow-up albums Parade and Under the Cherry Moon. In 1986 The Revolution was dissolved.

Wendy and Lisa released their first self-titled album in 1987, and have continued to record as a duo. In the mid-90s they began working on several film projects, and have regularly contributed scores to numerous television series including Crossing Jordan, Bionic Woman, and Heroes. Wendy and Lisa earned the prestigious ASCAP award for Composer’s of the Year for their work on Dangerous Minds, the theme to HBO’s Carnivale, Crossing Jordan and Heroes.

“Sometimes it feels more like being in a band together than your typical composer/producer relationship,” describes Executive Producer/Director Allan Arkush. “Every episode is done from scratch. Every cue meticulously crafted and composed to compliment each scene and story arc. During spotting sessions, Lisa writes many, many notes and impressions in little notebooks that she fills with her own very personal reactions to the episodes.”

He continues, “Wendy, when she’s not talking back to the screen, gives opinions, lots of them, and often asks that a scene be run again but without the temp music. She wants to see the work without any music telling her what to feel. We need their honest reaction to each episode. That reaction is translated into the music that is such an important part of the Heroes experience for you people watching at home.”

Heroes airs Monday nights on NBC. The original score album will be available exclusively from www.lalalandrecords.com on April 7th and available both digitally and in stores on April 21, 2009.

* features the voice of Shenkar