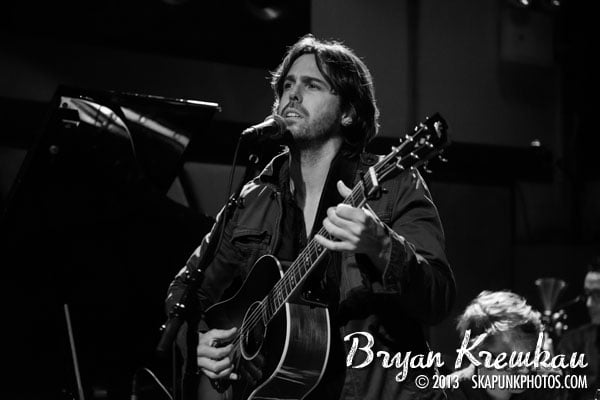 I’ve become a big fan of singer/songwriter Peter Bradley Adams this year. He’s releasing his fifth solo album The Mighty Storm on February 4th via his own label I Me Mine Records with distribution through Tone Tree. Besides the new album, Peter will be touring in select cities this month and will be touring a lot more in the new year. If you’re in the NYC area, check him out at Rockwood Music Hall (playing twice) on December 21st!


Update: Fans don’t have to wait until February to hear the album because you can listen to it right here!

“We recorded in RCA Studio A in Nashville, the old Chet Atkins studio built in 1965. Most of the tracking was done live… we all spread out in the same room, so you can really hear the sound of that space on the record.”

Like Adams’ other albums, The Mighty Storm is marked by strong melodies, the band’s understated, but muscular playing and the calm emotional intensity of his singing.

“Hey Believers” is an anti-spiritual that blends hushed acoustic guitar and long sustained notes from a churchy organ to deliver a message that’s equal parts faith and desperation.

“She Has to Come Down,” inspired by the Jack Kerouac novella “Tristessa,” is the story of a young woman slipping into a self-destructive vortex.

“There’s a certain grace and beauty to her behavior, and the narrator is totally mesmerized.”

The songs on The Mighty Storm may have a placid surface, but the soothing melodies and Adams’ low-key delivery run deep to portray the joys and insecurities of the human condition with a rare compassionate insight.

Nic Harcourt noted in a Los Angeles Times Magazine article: “Adams is fast developing as a songwriter who both inspires and questions.”

Peter will preview songs from The Mighty Storm in select markets during December/January before embarking on U.S. tour in February 2014.