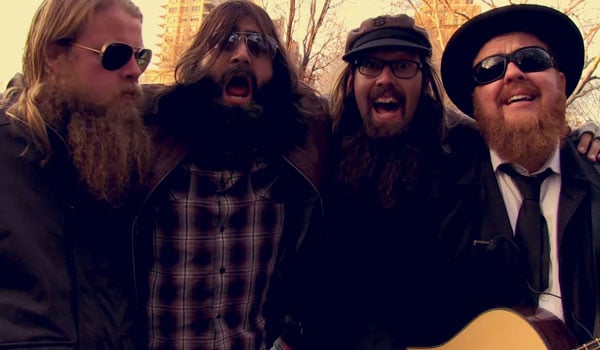 The Aussie bearded band that sings about beards, The Beards, have announced tour dates in the United States and Canada. Don’t worry if you don’t have a beard, you’ll be allowed to see them regardless. You might just get picked on that’s all. The mighty bearded band will be playing at the CMJ festival between October 15th – 18th and they are not to be missed!

If you don’t know who The Beards are, maybe you should watch the fun video they did with me for Before The Concert!

The kings of totalitarian beard-rock are embarking on a headline tour of Canada and the USA this Fall. The Beards Across America Tour will see The Beards taking their fiercely pro-beard message to selected cities across North America in an effort to unite the bearded and ostracize the clean-shaven.

The Beards formed in the later part of the 2000s in their home town of Adelaide, South Australia. It was a time when having a beard meant being subjected to abuse, slander, and discrimination. The original intention of the band was to provide a voice for the bearded man.

“We’d just always loved having beards” explains bassist Nathaniel Beard. “We noticed that not many men were wearing beards and we thought maybe deep down these people really want to grow one but they’re too concerned about how their friends, partners, co-workers and employers would react. Turns out we were right.”

Since then, The Beards have gained a global cult following with their ever-expanding catalog of songs about beards. After three albums, over three million hits on their Youtube channel, extensive Australian touring, charting in Triple J’s Hottest 100, touring Europe, performing at 2013’s South by South West, Canadian Music Week and The Great Escape (UK) and convincing countless people to relinquish the razor forever, The Beards have become the world’s premier beard-related musical act and the fortunes of the average bearded man are starting to change.

“These days, it’s far more acceptable to have a beard.” Proclaims front man Johann Beardraven. “That was us. We did that. But we’re only just getting started. Mark my words: we will not rest until all people have beards.”