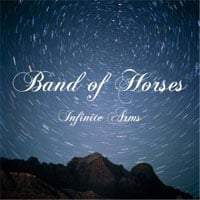 It’s been 3 years since Band of Horses’ last brilliant album Cease to Begin. Infinite Arms is the band’s major label debut and it’s an album that will certainly get them more fans (old and young). Expect to hear the band on more TV shows and radio as well. Their musical style sounds similar to their previous albums, but I think their music is more fine-tuned now. The fans that have been waiting all this time for their newest album will be happy; I know I wasn’t disappointed!

“Factory” is the first track and not sure I would have started the album off with it. I think their first single “Compliments” would have been more fitting. Don’t get me wrong, I like the song but it’s more of a slow ballad type of song. I think first tracks should be something that should jump out at you and suck you into the album. The next two tracks “Compliments” and “Laredo” are by far some of the best songs they have written.

The more I listen to this album, the more I appreciate the songs. What I love about Band of Horses is Ben Bridwell’s haunting & harmonized vocals. The band is heading in Neil Young/The Eagles/Tom Petty territory and I love it! The band has always teetered from indie rock to that Americana classic rock sound but I guess that’s why they are so popular. They appeal to both younger and older audiences.

When I saw the band perform at Carnegie Hall for the first time, I was impressed beyond belief. Ben’s vocals were just so fitting for that type of hall. The new band members (Tyler Ramsey and Bill Reynolds) have really added to their overall sound. The songwriting and singing harmonies just makes their music so much better. Listen to “Evening Kitchen,” perfect harmonized singing and almost sounds like a lullaby to me. Tyler and Bill’s presence are heard throughout the entire album and not just one particular song.

If I had to pick a favorite song, it might “Older.” It’s a song they have been playing live for some time now, and I believe it’s a song from Ryan Monroe? I was really looking forward to hearing it on the album. Also, “On My Way Back Home” is soothing folk rock song that I really dug as well.

If you’re expecting a rockier Band of Horses album, I’m not sure you’re going to like this album. Infinite Arms is slower than their previous albums but I really enjoyed it. The Americana/Alt-country style that the band is leaning towards is fine by me considering Ben’s vocals are more fitting for that style. So open your mind and check out this excellent Band of Horses album!

You can listen to the entire album at the band’s website here.