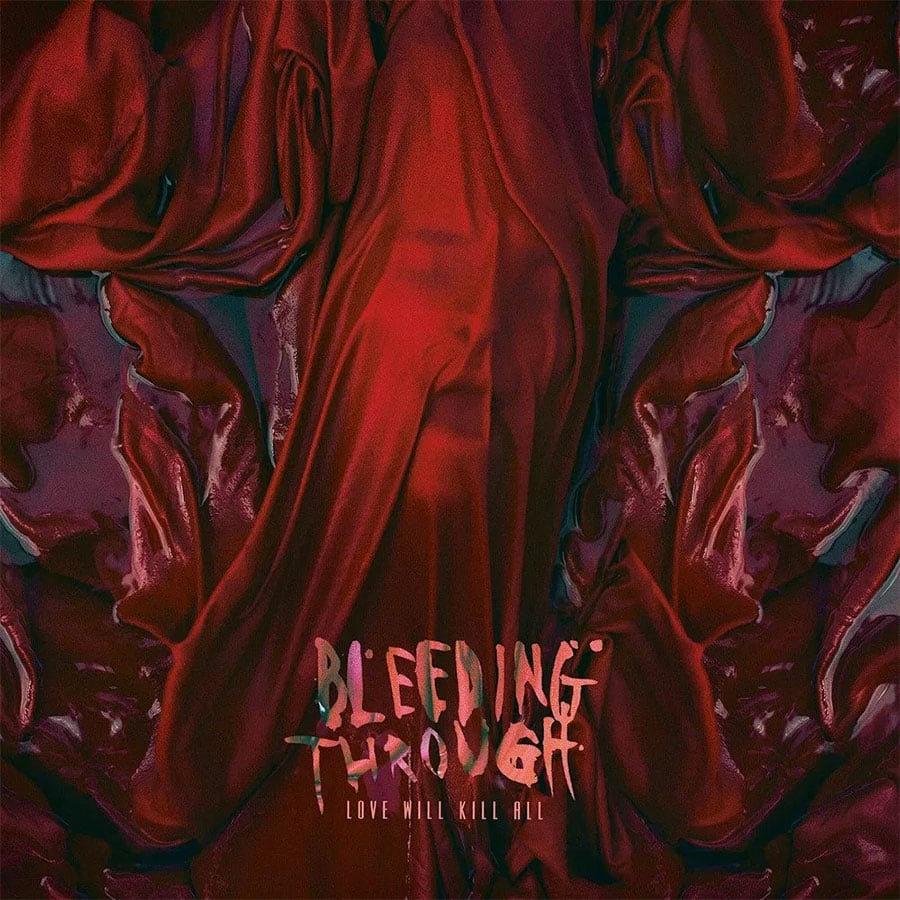 Much like their peers in Eighteen Visions, California’s Bleeding Through makes a comeback with Love Will Kill All, their first new album in 6 years. Hoping this becomes a thing from our favorite Cali metalcore 2000’s bands, this follows in line with Eighteen Vision’s strong comeback and return to form in ‘XVIII’, but does this have that same return to form strength and fan service that 18v album had?


Bleeding Through hasn’t had the easiest of paths, but they’ve definitely put in enough work throughout their time. Early efforts like Portrait of the Goddess led to signing with Trustkill records achieving big metalcore success with albums This is Love, This is Murderous, The Truth, and ending with Declaration. Not all was right as their label had made some poor decisions that hurt not just Bleeding Through but every active band signed to the roster at the time. This featured an even angrier tone reflected on Declaration, and in general a very real middle fingers blazing attitude on their self titled and The Great Fire albums. Eventually their run would in 2014, feeling the burn of past dealings and generally feeling passed over for the hard work they put in. Not the best way to end it’s initial run, but judging by the band’s later material expressing their frustrations; there wasn’t ever going to be a warm and fuzzy closure.

In their 4 years away, there was some side projects including the very BT sounding The Iron Son Enemy album, but they did a show or 2 in support of a fund raiser for The Ghost Inside, and I guess distance made the heart grow fonder and they decided to regroup and forge a new album. The new album for the most part dials some of the anger back, as well as some of the more black metal influence that overtook a lot of the band’s later years albums. Almost acting symbiotic reflection for their disgust at the time. After a short intro track we get one of their more mid career styled songs “Fade Into the Ash” which has a catchy sung chorus, which felt like it was par for the course. The next song “End Us” follows in that same fashion, maybe bleeding over a bit too much, when listening to the album in full length it’s hard to tell when one song ends and the other begins on top of a very out of ideas placed “yeah” inserted into the chorus. Songs like “Cold World” and “Dead Eyes” to an extent sound very later years BT, with some experiment ability on a chorus in “Dead Eyes” that sounds a little bit too adventurous for them and another odd insert into the album. “Buried” picks up a Great Fire like sound that many older fans may dig.

When you get this far into the album, it plays less as a nostalgia trip and some of the experimentation and flirtations with a more hard rock injection similar to Parkway Drive’s modern output comes off a little bizarre in comparison to the rest of their discography. The intro to “No Friends” contains a playful nod to Winds of Plague’s “2008 shit” but overall the song has a cadence and riffing similar to Slipknot’s “Psychosocial” with lyrics that try to embody some of that anger from their past in the lyrics, but just doesn’t seem focused. “Set Me Free” reminds me a lot of “Declaration” and to me is the strongest track on the album, the best display of the band’s fire. “No One from Nowhere” seems to continue that pace of later years efforts. “Remains” adds somewhat a bit more newer influence, while “Slave” adds in a burst of that band’s early sound. The album closes with “Life” with a great backing vocal from Marta during the chorus of the song.

It should also be noteworthy the production on this album vs past albums is a lot better in terms of overall sound quality. In the past there’s been issues with poorly recorded guitars or the drums and/or keyboards being on top of the mix, but with the exception of a few minor moments here, it’s a pretty balanced mix, although it does fall to some of issues with modern metal album mixes where parts seem a bit over glossed and there’s nothing to distinguish it from a lot of other band’s mixes.

Overall, this didn’t pack the same punch as Eighteen Vision’s comeback album. If there’s one thing learned in Bleeding Through’s discography, their later years albums didn’t have the punch of earlier full lengths but did have some great moments that didn’t span entire albums that made following them worthwhile. On This effort however, it seems time may have healed some wounds that needed to be exposed to fuel more of the rage of the album, as it seems time healed some wounds, and that time away seemingly softened the band’s approach. I guess life changes things and you can’t expect them to be angry and bitter forever, but it certainly would’ve helped here.