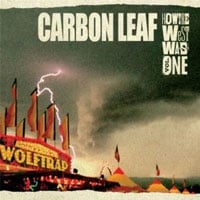 One of my favorite bands, Carbon Leaf, have gone back to their indie roots and decided to release their music on their own. They’ve had enough of the middle man and record labels and figured they can be just as successful without labels. How very punk rock of them! Their idea is to release new music every few months and as a fan, I just love that! It will just make my wallet a little thinner though.

Their first release independently (again) is How The West Was One Vol. 1 and contains 6 songs that the band wrote on their first trip out West. These songs are for the older fanbase and ones you might have heard live before. I actually haven’t heard these live or on bootlegs so it feels like new music to me! The band re-recorded the songs in their own studio and I’m very impressed with the production quality. Doesn’t sound like they recorded this in a garage or anything.

If you purchased the pre-order on their website, you were sent the songs in advance while the CD was still being pressed. Another very clever idea and nice gesture for the fans. The track listing is different than it is for the CD so I’ll go off what the CD starts and ends with. The opening track is “Native America” and one the band has been playing a lot during their recent shows. It could be the best track on the 7 track EP. The song has everything I love about Carbon Leaf. Great lyrics, wonderful vocals, cool guitar riffs and just everything about it. You can tell the band wrote these songs out West, and really got inspired with being out on the road. Besides Barry’s lyrics and vocals, I really think Carter’s guitar playing shines on this EP. I think he excels at the twangy Western slide guitar stuff. You can hear what I’m talking about in “Crossroads” and “For The First Time.”

“Midwestern Girl” is the most upbeat track on the album and one I think that will be a crowd-pleaser for their Midwest shows. “Unknown Bride” could be one of my favorite Carbon Leaf songs now. It’s something about it that I love, and was considering it for a first dance song for my upcoming wedding. I honestly can’t figure out what the song is about though and probably not what I’m thinking. Barry always has layers in his lyrics. You might think it means this but it really means this and that. The band needs to write a slow love song for us on the next album!

The EP is slightly slower than their usual stuff, but I think it’s just the alt-country/Western style that they have evolved into over the years. I don’t mind them moving away from the Celtic stuff that they started out with, because I just think the music they have been putting out for the last 10 years has been perfect. Nice mix of folk rock, western and even just plain rock and roll. It’s something for everybody really.

If you have any doubts about the band, do yourself a favor and see them live. I think once you see how the band plays live, you’ll become a fan! Be sure to support independent bands and purchase their music directly on their website here.