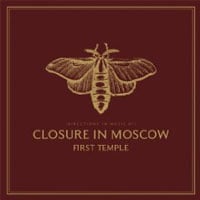 This CD has been sitting in my pile of CDs to review since May, when this album was released. I figured I would give this a shot to see what this band sounded like. Maybe I should have just left this CD in the pile? These are the types of bands I’m afraid of when it comes to reviewing CDs. Maybe I should just stop reviewing these bands and they will go away?

Closure In Moscow are from Australia, but have since moved to the United States to make an impact on the music scene. Gee thanks. This is Closure In Moscow’s debut album and I’m wondering why Equal Vision Records signed this band. For one, they don’t sound original and the singing is cringe-inducing. Chris deCinque sounds like Adam Lambert from American Idol, who I can’t fucking stand either. I don’t know why “singers” feel the need to shriek their lyrics but its god damn irritating. Closure in Moscow should go back to Australia. Have their own country be forced to listen to them because I certainly don’t want to hear anything else from them anymore.

Bottom Line: I have nothing funny to say, but this wasn’t good at all.
Notable Tracks: nada
Overall Rating:

Closure In Moscow releasing “First Temple” on May 5th