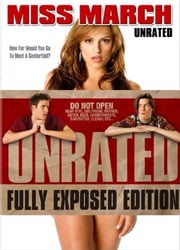 I usually like raunchy sex comedies but Miss March was just an awful, badly acted comedy that almost got turned off halfway through. If you can tolerate the TV show The Whitest Kids U Know on FUSE/IFC than you’ll like this….if not, stay away!

Miss March is about a high school guy who ends up going in a coma for 4 years, right before he’s going to have sex with his girlfriend of 2 years. Eugene (Zach Cregger) and his girlfriend Cindi (Raquel Alessi) promote abstinence to young students, but deep down Cindi wants to go all the way now. But just as Eugene is going to make that plunge, he ends up going down a flight of stairs and a book case falls on top of him. He wakes up 4 years later with his annoying, horny friend Tucker (Trevor Moore) hitting him with a baseball bat. Eugene’s parents moved away, and Eugene and Tucker don’t know what happened to his girlfriend Cindi. She moved away after graduation supposedly. When Tucker gets his latest issue of Playboy, they discover that Cindi is actually the newest Playmate of the Month. Tucker breaks out Eugene out of the hospital and they head for the Playboy Mansion. Along the way, they run into angry firefighters (mmm ok), their famous rapper friend Horsedick dot MPEG (Craig Robinson), 2 lesbians that make out constantly and other retarded things.

I didn’t know a damn thing about this movie before seeing it. I decided to watch it just because there wasn’t anything else on TV last night. There were some parts that I found gross & funny, but the rest of the movie was hacky, lame and extremely dumb. I knew I recognized Trevor Moore from somewhere but didn’t know where. Then realized these were the guys from The Whitest Kids U Know from Fuse (and now IFC). I’ve seen these morons perform in between songs at a Flogging Molly show once. It was the most retarded and unfunny thing ever to have these guys perform at a show like that. At least get someone funny! The skits I’ve seen from the show are like the really unfunny, deleted scenes from The State or Kids in the Hall. Yeah, that bad! Clearly these guys don’t have an original bone in their body. But for some reason, Fox decided to give them a movie to make which obviously was a bad idea. Just look at Rotten Tomatoes for evidence (4% rating!).

The only thing I really laughed at was when Eugene was in the hospital and shit all over the place. I actually couldn’t believe they showed that. But then they kept re-using that joke over and over again. It just became stale, like the rest of the movie. Craig Robinson was probably the best thing about Miss March; he’s actually too good for this movie. What were you thinking Craig!? Trevor Moore isn’t a good actor, and he’s not funny. He’s a cross between Jim Carrey and Johnny Knoxville in their worst movies. The whole time, his character was dressed up like Ace Ventura. Hawaiian shirts, red pants, white tank top; all that was missing was the giant hair. Just goes to show you how much this guy wants to be Jim Carrey.

If you want to watch a sex comedy, I’d recommend American Pie, Road Trip, Old School, and the more recent Sex Drive. This movie isn’t original, it’s not that funny and it’s probably one of the worst movies I’ve seen in a long time. If you can actually make it to the end of Miss March, I applaud you.