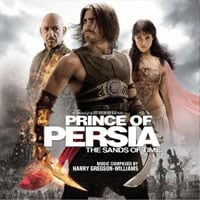 Prince of Persia opened in theaters this weekend, and didn’t really do that great. For a big Jerry Bruckheimer blockbuster, it should have done better. Perhaps the trailers didn’t look promising to viewers or maybe the controversy with having Jake Gyllenhaal portray a Middle Eastern man wasn’t what people wanted to see this Memorial Day Weekend. I’ll check out the movie on video and see if I like it, I have no expectations for this so maybe it will be fun to see.

Prince of Persia: The Sand of Time is based on the popular video games is about a street urchin who gets adopted by the King of Persia. Some wars happen, people get killed, there’s chicks involved and then there’s some nonsense about a magical dagger that can send you back in time to correct your mistakes. Man, if life was only that easy.

The film score was composed by Harry Gregson-Williams, and I’m a big fan of his work. I especially love the scores for Kingdom of Heaven, Chicken Run & Shrek (with John Powell), The Narnia movies and some others. His style is something I always enjoy to listen to on CD, as well as hear in the movies he worked on. He creates some excellent motifs and the score for Prince of Persia is just another fine example of his awesome composing.

The score features action queues galore, mixed in with some ancient sounding Middle Eastern instruments and themes. The score has that giant epic feel to it; just imagine listening to scores like Jerry Goldsmith’s The Mummy & 13th Warrior, John Williams’ Raiders of the Lost Ark, and Maurice Jarre’s Lawrence of Arabia. The Prince of Persia has that feel to it, plus Gregson-Williams electronic computerized sound. Ever since Lawrence of Arabia has come out, other composers have been borrowing that theme slightly and this is no exception. You can hear a bit of that in the track “So, You’re Going To Help Me.” But even if the this score might have borrowed motifs from scores, it’s still a fantastic score that I’ll be listening for a long time. If you’re into Middle Eastern, desert style scores this one is for you!