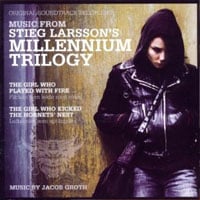 The latest books that everybody is talking about is The Girl with the Dragon Tattoo, The Girl Who Played With Fire and The Girl Who Kicked the Hornet’s Nest (The Millennium Trilogy) by late Stieg Larsson. The Swedish novels are about a crime fighting girl, who helps out an investigating journalist on cases.

The movies were made over in Sweden and are critically-acclaimed, but now they are being remade with Daniel Craig I believe. I’m sure that will be a big movie when that finally premieres. But back to the original trilogy, which this score is from. TV film composer Jacob Groth did all the composing for the movies, and this album features 11 tracks from the 3 movies.

The first two tracks are score tracks, which is sort of a mixed between electronic and orchestration. The third track “Would Anybody Die For Me?” is a singing track, but not sure who sings it. I felt the strongest tracks on the album was the theme for Blomqvist called “Blomqvist” (duh) and the animated & thrilling track “Running Out Of Time.” A lot of the tracks are mysterious and eerie. I can see this type of score being in a detective movie. I haven’t heard of Jacob Groth or his music, but I certainly do now after hearing this album.