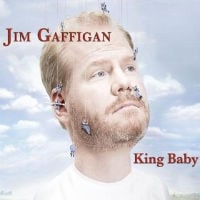 Stand up comedian and actor, Jim Gaffigan has released another hilarious CD, “King Baby,” recorded in December 2008 down in Austin Texas, and as expected it does not disappoint. You may have seen Jim before on his many appearances on Letterman, Conan and other various late night circuits. He also stars in “My Boys,” on TBS and probably has seen him on other shows like “That 70’s Show,” and “Flight of the Conchords.”

Jim Gaffigan always has gone for more of a “clean” comic where he doesn’t get vulgar and curses the entire set. It just goes to show you that cursing doesn’t have to make you funnier. Jim has a very dry sense of humor and always puts on a quiet voice after he makes a punch line like he is “speaking” for the crowd as if they were commenting. I think it’s a unique way to deliver jokes but it certainly works in his favor. Jim’s new CD “King Baby,” delves on various topics ranging from Bowling, to being lazy, to circumcisions and his favorite food in the world, Bacon.