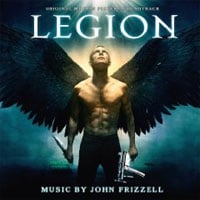 Paul Bettany and Dennis Quaid star in Legion, a movie about a bunch of angels…I guess? The movie came out last weekend and did well. Legion is about a fallen angel Michael coming to Earth to protect a baby that other Angels are trying to kill. The plot seems silly and stupid, but maybe the action in the movie is decent? Legion looks kind of bad though and not something I’d want to see in theaters. But just because a movie might be bad, doesn’t mean the film score is bad too.

John Frizzell composed the score for Legion and I’ve liked his previous work. Gods and Generals score is still one of my favorites. Other movies he scored include Alien: Resurrection, Office Space, Ghost Ship, and Whiteout. John’s score for Legion is interesting and exciting; especially in the tracks “It’s Started” and “They’re Here.” I presume that’s when things are happening on the screen. Occasionally there are choir singing/chanting in the songs, which I always like. It’s used in a subtle way and not always used, but I think that’s a good thing. Don’t want to over-do it.

Legion’s score contains 25 tracks in all, and is about 51 minutes long. There are some exciting cues and then some tracks that aren’t. But I actually liked what I heard and it wasn’t a complete bore. I have no idea if I will like the movie but I’ll give it a shot when it comes out on video.