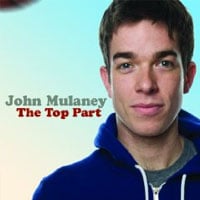 John Mulaney is currently a writer on Saturday Night Live, and has been featured on Best Week Ever, Jimmy Kimmel Live and Late Night with Conan O’Brien. Now he has a stand-up album on Comedy Central Records called the “The Top Part.” The album is an hour long, and if you haven’t heard of John Mulaney by now, you will.

This performance was recorded live on November 28th in San Francisco. On the CD, he talks about drag queens, Goth girls, Law and Order, getting his license, Scarface, Donald Trump, the Dow Jones and basketball. I was laughing when he was talking about being on the subway and some lady mistakenly took him for a rapist. It’s scary how much he knows about Law and Order. I have never seen an episode of that show but after hearing him rip the show apart, I don’t think I want to start watching it. How many shows of Law and Order dpo they have now, 10? John talks about a lot of random things in his act, but he does it in a very funny way. I never heard of him before but I’ll have to check out one of his stand-up specials next time it’s on Comedy Central.