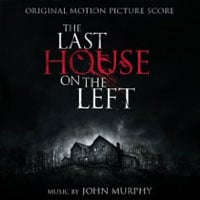 Last House on the Left is a remake of the 1972 film of the same name. The film is about parents who seek revenge on people who did something to their daughter. But the easy part is they don’t have to look to far since the people are taking shelter at their vacation home.

John Murphy composed the score for this thriller. He has previously composed the scores to Lock, Stock and 2 Smoking Barrels, Snatch, Sunshine, and 28 Weeks Later. The Last House on the Left score is eerie, quiet and dark. Would you expect light and playful music for a thriller like this? Murphy has composed a score that seems like it fits the movie. I don’t know though, there’s just something about horror & thriller scores that makes me not interested. The Opening Titles and some other tracks are okay. I like the slow keyboard/piano playing, but it’s not that exciting to me. It’s more background noise than anything. I’m sure the score fits the movie, but as a standalone, I didn’t like this score all that much.

Bottom Line: I don’t find dark and eerie enjoyable to listen to
Notable Tracks: Opening Titles, Are you ready to be a Man?
Overall Rating: