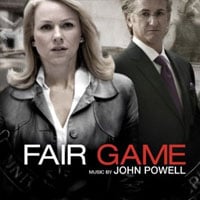 Fair Game stars Naomi Watts as a CIA operative who’s cover is illegally blown. That results in her career destroyed and her marriage on the brink of destruction as well. The action-thriller is based on a true story and was directed by Doug Liman. Liman and John Powell have done a few movies together now (Bourne Identity, Jumper), Fair Game being the latest.

Composer John Powell has a wide range of film scores, but he’s usually the go-to-guy for scores like this one. There aren’t any standout tracks really, and the score blends together nicely. A nice metaphor for this score is like someone tip-toeing in a room, looking for something secret. A spy movie basically. It has that whole feel about it and I think it works well on the soundtrack, so I’m sure it’s works perfectly in the movie. Most of the tracks aren’t that exciting but I don’t think it’s meant to be that. They are subtle, and background noise type of tracks. Powell uses a slight mix of electronic stuff that he’s know to do from time to time, with the orchestra stuff. Violinists plucking away on their violin is heard a lot, as well as clicking/computerized drum beats as well. Fair Game’s score definitely gives it away that this is a spy movie.