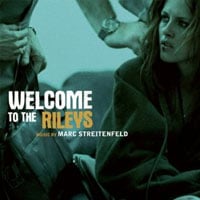 Welcome to the Rileys is an indie drama starring James Gandolfini, Kristen Stewart, and Melissa Leo. The film was directed by Jake Scott, and written by Ken Hixon. Based on the movie’s description, the Rileys are really messed up people. People that should probably get professional help. After the death of their daughter, Doug and Lois Riley begin drifting apart. Lois blames herself for the death, while Doug has an affair with a waitress. He ends up meeting an underage hooker, who he pays to stay at her crappy apt instead of doing anything with. Hmm, that seems healthy.

Marc Streitenfeld goes from composing a big budgeted movie like Ridley Scott’s Robin Hood to doing a score like this one, a small budgeted indie flick. The score at times feels like a folk band did the work. You have strings, acoustic guitars, upright bass…even a banjo! The track “Rebirth” seems like a theme to something or a character but since I don’t know who that is. That motif pops up throughout the score. I liked the score tracks from Marc, because it has that woodsy, folk rock feel to it. Besides the score tracks, there are tracks from Kitty Davis and Lewis, Odetta, Joe Simon, Shiny Toy Guns, The Kills, and The Yang Yang Twins. If I had to guess, the Shiny Toy Guns’ track “Le Disko” was used for a stripper scene. It’s just one of those songs I can see is great for stripping. Not like I would know or anything. I better just shut up before I get in trouble with the future Mrs ReadJunk.