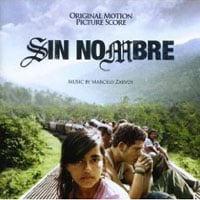 Sin Nombre is a Spanish language film written and directed by Cary Joji Fukunaga. It was executive produced by Mexican actor Gael García Bernal. I haven’t seen the movie yet, but based on the score, I’m not sure I want to. The movie is about a Honduran teenager who reunites with her father and makes their way up north to the United States.

Marcelo Zarvos composed the score, and it contains a lot of accordions, guitar playing and ominous sounds. It has that Latin flavor, but also is very dark & moody. To be honest, it was quite boring to listen to. Many of the tracks went by and I couldn’t tell you what was played. The score to Sin Nombre is just background noise, which doesn’t make it interesting to listen to on CD. Maybe someone else will find it interesting but I didn’t.