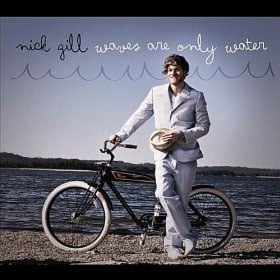 Nick Gill is a singer/songwriter based in Nashville (not surprised) and his band is something that has caught my ear. (or well ears..I’m not Van Gogh after all). Waves Are Only Water is being re-released on Rock Ridge Music digitally and it’s worth listening to if you enjoy feel-good pop rock music.

I’ve been listening to more and more singer/songwriters lately, and Nick has a memorable voice. He has a very mature-sounding voice for his age. I assume he’s younger than me since he released his first album in high school. It’s funny, when I was looking at his Facebook page, he sort of looks like the younger brother of Barry Privett of Carbon Leaf. Those two bands would actually be perfect on the same bill. Waves Are Only Water is Nick Gill’s 4th album and contains seven tracks. “By The Way” is a excellent song to start the album off because it’s upbeat, and sets the tone for the rest of the album.

“Dawn” starts off slow but picks up after a little. “How It Feels (to lose a friend)” is a good example of Nick’s amazing and unique singing voice. There’s certain parts of the song that get really high like a Hank Williams yodel but never breaking. If I tried singing those parts, I’m sure my voice would be cracking like Peter Brady did during “Time to Change” on the Brady Bunch. Now I’m dating myself with that reference so look it up on YouTube ya young whipper snappers. The song has a nice collection of singing, piano, subtle guitar playing in it and if there was one song to try out, it would be that one.

Nick Gill somewhat borders on country-rock for some tracks like “Love Never Has A Chance.” It feels like it’s going to go country and then thankfully doesn’t. This song has a good beat to it, catchy chorus and makes me tap my foot. Honestly, I’m surprised I enjoyed this album so much and I’m looking forward to hearing more from Nick Gill.

Bottom Line: Memorable singing and feel-good songs makes this album a winner!
Notable Tracks: By The Way, How It Feels (to lose a friend), Love Never Has A Chance
Overall Rating: