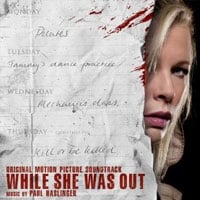 While She Was Out is a horror thriller flick starring Kim Basinger. Wow, haven’t heard her name in awhile. She plays a housewife who writes a note on a car that parked like an idiot at the mall. When she leaves the mall at night, the car that she left the note ends up harassing her. They end up killing the mall cop trying to help her and plan on raping her. She flees to a forest and the gang of men goes after her. So it’s a family movie then?

The suspenseful score was composed by Paul Haslinger, who also composed such movies as Underworld, Underworld Rise of the Lycans, Death Race, Shoot Em up and more! The music is what’s to be expected in a movie like this. Eerie background noise that gets louder and more distinctive as something is happening on the screen. I’m not a fan of horror flicks or their scores. I don’t really find them interesting to listen on CD. This Cd would be only liked by die-hard film score fans. Unfortunately, this score only works for the movie and doesn’t sound that exciting on CD.